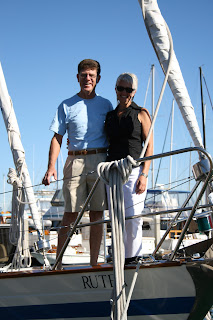 . . . but it's pretty hectic.  We know that soon we'll be under way and have more time to reflect, however, now it's a matter of dealing with what seems like a million details.  Our Fiesta por Adios was a great success and we got to spend the afternoon with family and good friends.  Now, it'd down to crunch time as we'd like to leave on Wednesday 12/15/10 at 0-dark-thirty.  The forecast is pretty good for the rest of the week.  Too bad the weather that we've had the last two days (highs in the 80's) won't hold for a while longer but soon we'll be far enough south that we'll be able to put the long sleeves away for what will hopefully be a long time.

Poor Rutea!  She's sitting low on her water line, a blatant indication that we've been putting way too much on board.  Plus, she lists badly to starboard, which is actually more a problem with her design than the way we stow our stores.  Her huge battery bank is on the starboard side as is the massive steering gear.  Also, the workshop with the spare parts stowage and the navigation station are on the starboard side.  The list is less pronounced if we empty the starboard water tank but I prefer to have it full.

I've been testing and re-testing all of the systems and everything checks out fine.  Of course, I'm the first person to admit that once we get away from the dock, all hell will probably break lose.  Right now, though, I'm too tired to think about it.  Tomorrow may be our last day in San Diego for quite a while.
Posted by Neal aboard Rutea at 9:32 PM