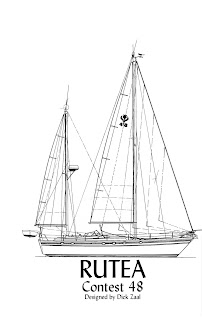 I frequently worry about how many holes I keep drilling in our boat.  It seems that I've always got a drill in one hand, punching holes in one part or another.  Today was a little more dramatic than usual as I drilled a 2-and-a-quarter-inch hole right through the hull - 6 inches above the waterline.  After fretting about it for too long, I chucked the big hole saw in my 1/2" Milwaukie drill and proceeded to do the dreaded deed.  The reason for the massive hole is for the new bilge pump I'm installing (it's actually a Christmas gift for Ruthie so don't mention it to her - it's going to be a surprise. I can't wait to see the look on her face!).  This is no ordinary submersible bilge pump.  It's rated at 4,000 gallons per hour and has a shiny red finish.  Like so many boat projects, it's taking me a lot longer than I had planned but when it's completed we'll have three electric bilge pumps, two built-in manual ones, one manual portable pump and lots of buckets!
Posted by Neal aboard Rutea at 11:51 PM No comments:

. . . until we're scheduled to leave San Diego, weather permitting.  Even though I've had this blog on line for about two months now, with virtually no posts, I'm prompted to enter something as I have just printed up boat cards with our web address on them.  I think it would be embarrassing to publish a web address and not have anything posted on it.
All of the major items have been checked off our 'To Do' list but that doesn't mean that we have a shortage of projects.  One of the projects that was on the list was to replace our bow roller.  After hundreds (maybe thousands) of anchor deployments and retrievals, the massive nylon roller had just worn out.  However, when I went to remove the roller, the 15mm bolt that serves as an axle snapped as if it were a toothpick.  This caused me to start thinking about other critical components that are also made of stainless steel and are the same vintage.  The main mast chain plates came to mind.  Realizing that nothing short of replacing them would ever assuage my anxieties that they could fail at any moment, I tore into poor old Rutea yet again.  Working on one side at a time, her cap and intermediate shrouds dangling helplessly, I drove the old chain plate to my stainless steel fabricator of choice, Manny Melo.  Manny looked at the thick piece of stainless steel with his critical blue eyes and said, "Yeah, these ought to be replaced.  I can have it for you on Saturday."  I think Manny could tell by the way I looked him straight in the eye, unblinkingly, that I was not above getting down on my knees and begging.  Even though I didn't say anything, Manny said, "What?  You want this today?"  I just looked at him again until he said, "I'll call you this afternoon."  Manny not only came through for me then but the following day we had an identical conversation (or lack thereof) and once more, Manny performed his magic.  The chain plates were expensive but I still tipped Manny an excellent bottle of 12-year-old single-malt Scotch.
So, yesterday we went out for a sail with Corie (our future shipmate and Number Two Daughter with her friend, Kyle) and Caity, (Number One Daughter and her boyfriend, Danny) in San Diego Bay.  There was just enough wind to put enough pressure on the mainsail for me to fine tune the rig.  From my untrained eye, I think it looks great - straight and tight.  Actually, I followed Selden's instructions and tightened the cap shrouds to 15% of their breaking strength or about 2,800 pounds of tension.  It seems like a lot but I assume the manufacturer knows what they're talking about.
I will try to keep my postings more up-to-date.  Maybe I'll recruit Ruthie and Corie to contribute.
Fair winds and calms seas to all.
Posted by Neal aboard Rutea at 12:10 PM No comments: