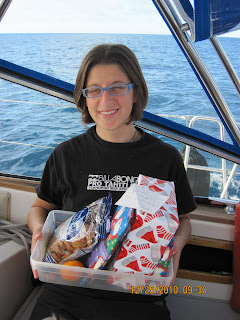 Christmas Morning Underway
I still don't believe it, but Ruthie wrote in the log book that on our passage from Abreojos to Bahia Santa Maria, she saw Santa Claus and his reindeer fly across the sky when she was on watch from 2330 to 0200. After all, that area has almost no population and there would be no place for Santa to stop. I didn't actually accuse her of making a false entry in the log book but I remain unconvinced.
Regardless, we had a very nice Christmas morning with bright blue skies and relatively calm seas. The wind was too light so we were under power. I made a full-on breakfast and Corie got to open her presents. Cabo San Lazaro came into view late in the morning and we dropped our anchor in Bahia Santa Maria in the late afternoon. After a fantastic Christmas dinner, we all went to bed early.
Bahia Santa Maria is one of our favorite anchorages. It's huge - the opening is eight miles across - and it's almost always a calm place to anchor. Last year when we were there we traded a six pack of Coke for six lobsters. I asked for a better deal but the pangeros wouldn't hear of it. The one big draw back to the bay is that a heavy surf breaks almost entirely around the inside perimeter, making a dinghy landing an adventure in of itself. Regardless, it was something we had never tried so we loaded up the dink and took off exploring. From where we were anchored, we could see a fish camp so we headed that direction. After several passes, we thought we saw a spot where the surf only broke occasionally so we went for it. As it turns out, beaching the dink there was easy so we pulled it as high up as we could, set the anchor and took off.
It was a little intimidating at first as the road lead right through the fish camp. Here was a small cluster of shacks made from any small or large scrap of lumber or tarp that could be found. One shack had a roof made of a political campaign's banner. Another had part of one wall with a nicely painted panel that said "Sixteen Adult Life Jackets Inside" but I kind of doubt there actually were any life jackets there at all. People seemed to mostly ignore us though we had to be an oddity. I heard a mother singing to her daughter and she continued singing as we walked by, despite our intrusion. We were virtually walking through their living rooms. Even though this is about as poverty-stricken as one could find in the western world, there didn't seem to be a sense of desperation. It was obvious that these people worked very hard for not very much but we heard laughter and saw people relaxing on the Sunday after Christmas. 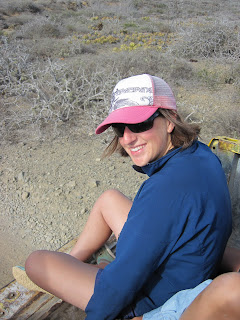 Corie Riding Back to the Fish Camp

We continued to walk all the way to the Pacific, a distance of about 4 kilometers. The beach there is famous for the amount of jetsam and flotsam that shows up on those shores. It certainly appeared that it would be a fantastic beach for which to collect shells, however, I have a very strict policy against such practices. I threaten to check Ruthie's pockets. In the distance we could see the hulk of a ship that had come to grief on that beach. Just last month a sailboat also met a similar fate though we didn't see it. It had taken us longer than expected to walk there so we didn't stay long.
On our walk back, Corie complained of a blister she was getting on her heel. Just at that moment, an old yellow Ford pick-up truck, loaded with families, came by and offered us a ride. We piled in the back with the kids and dogs and rode back to the fish camp. The little girls in the truck were shy and giggling at first but gradually warmed up. They had spent the day at the beach. When I got out my camera to take their picture, they squealed and hid their faces. There was much joking and laughing when we parked at the fish camp. We thanked the driver as graciously as we could and walked on back to the dinghy. It had been a unique adventure.
-----
At 12/28/2010 12:23 AM (utc) Rutea's position was 24°34.51'N 112°04.12'W
Posted by Neal aboard Rutea at 4:49 PM