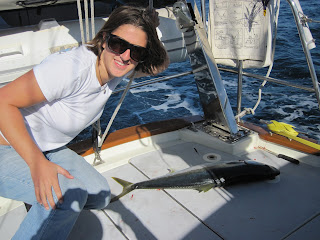 It wasn't an early start from Turtle Bay this morning - about 7:30 - but the sun was shining and we were starting the second half of our trip down Baja California.  Even though the temperature was in the upper 50s, it felt warmer and the wind had clocked around to the northwest where it belongs.  I hoisted the mainsail as we left the bay and I went below to start my sessions on the ham nets.  While I was still working the nets, Corie came below and got down one of the fishing rods.  She then started rummaging through my tackle box and I suggested a cedar plug.  She got it rigged and it wasn't to much later when - zing! - the clicker on the reel started screaming.  I rush up to the aft deck and helped her reel in a very large and attractive piece of kelp.  Undeterred, she change to a dark purple feather jig and got distracted with other things on the boat.  Once again, - zing! - went the clicker and this time she reeled in about a 15-pound yellowtail.  It was the first fish we had caught this trip.

The other important thing to happen today was we were able to shut down the engine and sail.  Up to this time, we've had to motor because either the wind was too light or it was coming from the direction we were trying to head. Today, though, the wind had picked up to about 20 knots from the northwest and with the main already hoisted, I unfurled the genoa.  We ran wing-on-wing for several hours straight and it was glorious - I hand-steered the whole time which we almost never do as the autopilot does a better job and doesn't complain as much.

Tomorrow we head for Abreojos and we'll likely be out of internet range for a while but I'll still try to post something.  Right now, here in Asuncion, there's a seal that's trying to get on board Rutea.  Nothing I do seems to discourage it.  Let me know if you have any ideas.

Merry Christmas to all!
Posted by Neal aboard Rutea at 9:16 PM