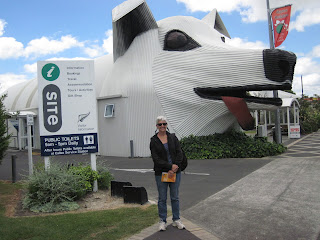 Not all i-Sites were this cute
The documentation available to tourists in New Zealand is nothing short of amazing. In addition to that, almost every town, regardless of size, has an i-site - a comprehensive store front that is staffed with knowledgeable people, computers, brochures and guides - all of it for free. Some even sell souvenirs. The staff will make reservations on your behalf, answer questions, offer recommendations or even check the weather for you. One of the guides we picked up has a list of all the campgrounds in New Zealand and we were pleased to find there was a place to camp right in downtown Wellington. 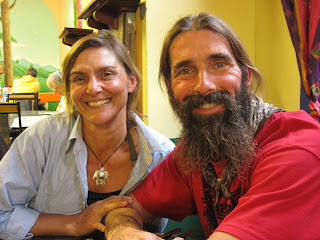 Randy and Jenny of S/V Mystic
We found Rowena's Backpacker's Hostel without any trouble and I realized that it had been many years since I had stayed in a place like Rowena's. In fact, I don't think I had ever stayed in a place like Rowena's. Almost looking like an huge, old, run-down home, it sets behind another house and is accessed by a narrow alley that runs up the steep hill. In the very back is a small patch of grass where they allow tents to be pitched. It's almost like camping in someone's backyard. There must be forty rooms in the building, with either 2, 4 or 6 people to a room. The toilets and showers are unisex and the kitchen is communal. Our first night there we were checking out the kitchen and we ran into some friends that had crossed the Pacific the same time we did. It was great to see them and we spent a lot of time swapping stories.

Yesterday we took in the Museum of New Zealand and then got fish and chips at a popular pub. Today we walked from Rowena's through downtown and it had been a long time since we walked through a major urban city on a Monday morning. There were thick crowds everywhere, the espresso bars were all packed and the traffic jamming. We took Wellington's only cable car up to the botanical gardens. It was a beautiful day and the flowers were spectacular. The path wound it's way through forests, gardens and herbs. The trail ended at the Norfolk Rose Garden, which has who-knows-how-many varieties of roses but virtually all of them in full bloom. Right next to the rose garden is Anderson Park. 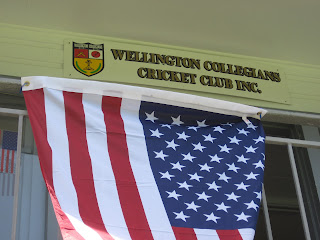 Normally, a cricket park wouldn't attract too much attention from us except there were dozens of American flags attached to the chain link fence and loud rock 'n roll coming from a loudspeaker. We wandered in and were greeted by a woman who works for the American embassy who said that this was an event to welcome the American rugby team. She invited us to stay for sausages and soft drinks as the team was due to arrive in just a few minutes. There were only about thirty or so people milling about but the place was decorated festively with bunting and flags. There were a bunch of brand new rugby balls lying around and I picked one up and began to toss it around as if it were a football. 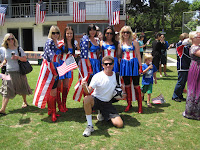 Just before the rugby team arrived, a group of attractive young women dressed in red, white and blue sparkling skimpy costumes showed up. Just as the team's vans drove on to the field, the girls in costume broke into a cheer. Frankly, it was a little pathetic but it wasn't their fault - they had obviously missed out on the training they needed. Regardless, the American World Rugby Cup Team climbed out of their vans and assembled in some sort of order. A man wearing a sports coat and an American Rugby baseball cap began to speak into a microphone. His name is David Huebner.

David Huebner is the American ambassador to New Zealand. After he introduced the team's coach (who said very little), he asked the attractive cheer leaders to do another cheer and they did the same one they had done earlier. I guess there was supposed to be more fanfare, more people, more excitement but there was very little. It appeared that it was over as soon as it had started. Ambassador Huebner was walking by me and I said, "Uh, Mr. Ambassador? I'd like to introduce myself . . .". Ruthie and I engaged him for somewhere between five and ten minutes, talking mostly about the South Island and New Zealand wines (he said that most New Zealand wineries are owned by Americans). He was very gracious and didn't appear to be hurried. We exchanged cards. As it turns out, he was the first openly gay ambassador appointed by President Obama and only the third openly gay ambassador in US history. As we were leaving the field (my brand new rugby ball signed by all of the American rugby team under my arm) we noticed the stretch BMW with the two Americam flags mounted on the front fenders and the two very large bodyguards waiting patiently behind the building. 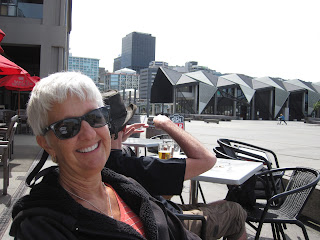 From there we walked to the New Zealand House of Representatives but we had missed the tour. We walked back to Rowena's via the waterfront, stopping for a beer on the way. I have fallen in love with yet another New Zealand city.
Posted by Neal aboard Rutea at 1:51 AM