Sweet Home Away From Home 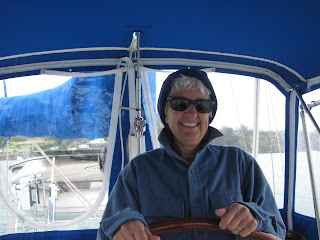 New Zealand Summer Attire
After six short holiday weeks in the U.S., I am back in New Zealand!  I had a wonderful stay in California and zigzagged from socal to norcal by car and plane.  My first thought?  How could it take just twelve hours of flying over the Pacific to cross the blue water that took us a year to sail through?   As we say…. Nothing goes to weather like a 747!  Really though, twelve hours was not long enough to prepare me (after living in small, third world villages for a year) for navigating the security lines in LAX at 6:00 a.m.  There were more people in that line, at that time of the morning, than I had been with in one place in over a year!
My second thought?  The livin’ in the U.S. is easy!  The stores have everything and anything you could possibly want!  Choices are overwhelming!  Traveling to any destination you want  is easy!  The internet is fast!  The streets are big.  The houses are big.  The stores are big and bright. Restaurants are everywhere! Schools and colleges are everywhere.  Access to information is easy.  Life is fast.  People are on the street day and night.  People are out and about every day of the week.  No rest on Sundays!
The funny thing?  After just a couple of days, I was right back in to life in  the U.S.A. fast lane, just as if I had never spent the last year traveling at six knots per hour!  I was driving 80 mph on the freeway cursing people that were going too slow!  Crazy!  What did I learn?  That the human species is very flexible!  We do what needs to be done!  We can adapt at will and as necessary.  Oh yes, and that there is No Place Like Home!
OK- back to the New Zealand summer- which is certainly colder than the San Diego winter!  Our first order of business was to order a flat white and shop the after Christmas sales for camping and tramping gear.  We are now prepared for freedom camping as well as Holiday Parks.  Since we haven’t camped in a long time, we figure we better do some practice camping before we set off into the wilds of the south island (believe it or not, life on Rutea is a step up from camping!).  That way, if our shopping list was optimistically short, we can hit up a camping store or a five star hotel in Auckland (don’t tell Neal I said that) to get appropriately prepared.  (I take back what I said about being totally adaptable..)
In the mean time, we are waiting for the evening high tide so we can motor down the river (without running aground) to Mcleod Bay where we will anchor off of a sand bar (Mac Donald Bank-in the middle of the bay) which will dry at low tide tomorrow noon and host an anniversary party for our Kiwi friends, Blue Moon.  Good thing the sun doesn’t set until 9:00 p.m.  Good thing it is not raining… yet…
Neal spent December working on Rutea and has the boat looking spotless!  He prepared a rack of lamb for my return dinner and bought champagne!  Rutea looks and feels like every bit of home that Orchard Avenue exudes.  Of course I am readjusting my spatial requirements, walking to the heads for showers and laundry and slowing back down to one or two projects a day, but this is also home.  I take my tea in the cockpit every morning and watch a flock of ducklings paddle by.  The river bank is lined with kids and Dad’s with fishing poles.  Cruiser friends stop by for boat project advice and sympathy.  The weather is still a huge topic of conversation as is next year’s cruising route.  It’s a sweet home, away from home!
R of Rutea
1/22/2012
Posted by Neal aboard Rutea at 12:52 AM