(Editor's Note: I can't figure out how to add to my previous post using my iPad. Please forgive my technical ignorance.) 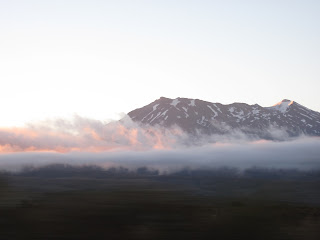 Mount Tongariro
It was cold and dark when the alarm on our cell phone went off at 0500. I trundled up to the toilets and came back, shivering and huddling over the little space heater in the cabin. I made coffee for me and tea for Ruthie using our single-burner camp stove in the cabin. It was just getting light outside as we made our way up to the bus stop, all our gear and food stuffed into our cheap and funky knapsacks. The other hikers and we stood around, stomping at the ground as we waited for the bus. No one spoke as the modern bus drove down the highway towards our drop off point. The clouds around the base of Mount Tongariro were glowing pink with the first rays of the morning sun but the top of the peak was cloud-free, allowing us a good view of the snow-covered top. 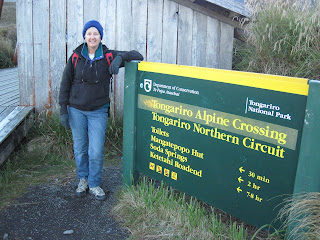 Trail Head
Usually the Holiday Park only has one shuttle per day, however, the Crossing had been closed the previous day due to bad weather and so were two days worth of hikers on this Saturday. Add to that a three-day weekend (Auckland Day on Monday) plus a summer weekend and the number of people making this famous New Zealand Great Walk was in the hundreds. At the drop off point the driver gave us some final instructions: Expect winds of 60 kph at the top with below freezing temperatures. Don't turn around and try to come back from where you've come - you'll be walking into the wind. The last bus is at 1630 - that gives you ten hours to cover twenty kilometers and a 1,000 meters of elevation gain. 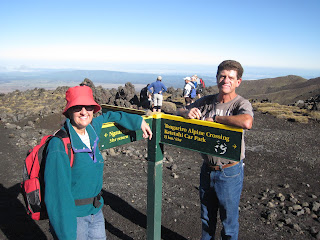 The wind was calm as we started up the trail which was quite flat at first. Because this is a relatively active volcanic area, there are no trees and only the sparsest of vegetation. Even though I was was walking, I struggled to stay warm as we were still in the shadows of the ridges we had yet to climb. After about four kilometers, we approached the first steep section of the hike. Like many of the hiking trails in New Zealand, someone had gone through tremendous time and expense to install well-made wooden steps to get the hikers through the steep parts. By the time we reached the top of the ridge, I had stripped down to just my t-shirt and jeans but was forced to bundle up immediately once we stopped for a break. From there, we walked across the crater of a dormant volcano, the flat, smooth ground a welcome respite from the steep stairs. 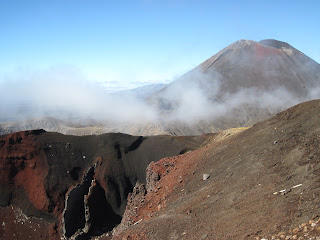 The View from Red Crater of Mt. Ngauruhoe
Mt. Doom in the Lord of the Rings movies
Now we faced the second steep part but this time there were no stairs. The wind had started to fill in and it seemed to be getting colder despite the fact that there was bright sunshine. In places the path narrowed to just a few inches wide and I was forced to take my frozen hands out of my jacket pockets in order to hold on to the rocks as we climbed up the ridge to Red Crater - a bad slip here could have spelled disaster. The going was slow and the howling wind made my nose run continuously. We both had to take frequent stops but we finally made it to the precarious top where we had spectacular views of the mountains that were used in the Lord of the Rings movies. As we started back down, we got an excellent birds-eye view of the bright green Emerald Lakes with the steam from geothermal vents rising from their edges. Although it was only 10 in the morning, we stopped for lunch of salami, cheese, nuts and dried fruit. We each drank a liter of water. 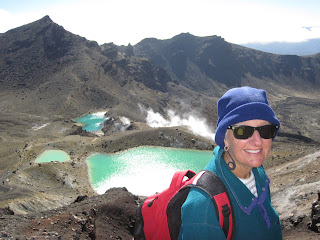 Emerald Lakes with steam from geothermal vents
The balance of the trip was far less exciting or arduous but we didn't get to the pickup location until about 2 in the afternoon even though we walked steadily with few rest stops. One group of young people who made the crossing with us applauded when they saw us finish. I think they were privately worried that they were going to have to go back up and carry us out of there. "You didn't think us old folks were going to make it!" I said to their cheers. Our bus back to the Holiday Park arrived on time and our fellow hikers were far more animated on the way back even though everyone was exhausted. Ruthie fell asleep at 7pm and I was in bed not much later.

I got some great photos but I'll have to wait to post them until I can get to a regular computer as it's not possible to do from the iPad.
Posted by Neal aboard Rutea at 1:14 PM