We have been driving and camping around the South Island for almost two weeks now and since we've checked into a 'civilized' room, I can find no excuses for avoiding a posting. Right now we're in a 'Holiday Park' in Hokitika on the west coast and just about exactly opposite of Christchurch. I could write for a long time about Holiday Parks but I think I'll save that for another post when there's nothing else going on. 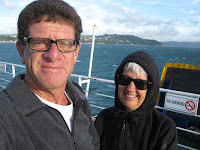 We caught an early morning ferry from Wellington and even though the wind was blowing at about thirty knots, our crossing to Picton was relatively calm and our excitement was almost palpable. From there we drove to Nelson along the most twisting road I've ever been on and rendezvoused with our friends, Michael and Gloria, on their beautiful Beneteau 50 Paikia Mist. We spent two nights as their guests on board and got a great tour of the town. Departing from there at the crack of 10:30 or so had us following the road back towards the east side of the island and the area called Marlborough - more specifically the famous wine-producing town of Blenheim. Years ago during one of our bashes up the west coast of Baja, we 'buddy boated' with a 56' Nordhavn trawler called Cloudy Bay which also turns out to be the name of a well-known New Zealand winery. I had suspected that the owners of the boat had once owned the winery and sold it, using the profits to buy a luxury yacht. That became our first stop of our wine-tasting tour but there was no connection between the winery and our buddy's boat. Regardless, we languished in the lavish wine tasting room, sampling every kind of wine they make and enjoying every drop. By this time we were feeling quite happy and with a devil-may-care attitude we purchased several bottles that were well outside of our meager budget. We asked the very kind woman who was helping us to recommend some other vineyards and we sampled more delicious wine and bought still more bottles, including a wonderful dry rose.

With great reluctance, we moved on and pointed the bow of our trusty Toyota towards Christchurch. It turned out to be a long drive and we finally picked out a holiday park near the coast but still a few miles from town. As holiday parks go, it was a little more basic than most but it had a nice grass area on which to pitch our tent. Almost all of the camper sites were occupied and in a conversation that took place the next morning at the communal kitchen, we found out that most of the people living in those campers were the displaced residents from Christchurch's massive earthquake just a year before. Whereas we had planned to spend a full day visiting Christchurch we only spent a couple of hours as most of the places the guide books spoke of were in the city's 'Red Zone' and no access was possible. It was sad. Instead we drove out to Akaroa, a small town on the end of the Banks Peninsula that was supposed to be 'charming' but there were two cruise ships in town that day and it struck us as more of a zoo than a quaint seafaring town. We instructed our GPS to find us the closest campground and it directed us to a wind-blown spit of land on the south end of Lake Ellesmere: Hidden behind acres of farmland, this has been the most remote and primitive site at which we've camped - no only was it free but there was no one around for miles.

Our next stop, apart from a brief single-malt-scotch tasting in Oamaru, was the university town of Dunedin and we thought we had lucked out by getting the best spot on which to pitch our tent at the holiday park only to find out that we were just a few meters from a busy road that carried traffic all night long. Other than that, we thoroughly enjoyed the town with it's rococo architecture, the Speight's Brewery and the Cadbury Chocolate Factory. We also toured the local museum and strolled through the university's campus, our first time at being on a college campus in a long time. Still, we found more than enough to do to keep us busy for two nights (despite being camped next to the road) but after that we were glad to get underway again and continue our trek south.


We found our way through Invercargill and on to the small town of Bluff where we pitched our tent in a very nice community campground. We broke camp early the next morning, packed what we would need for two days, put our van in a secure parking lot and boarded a ferry to Stewart Island. Since there were only a few passengers on the ferry at that early hour, I engaged the skipper in a conversation: 'You must see some pretty rough weather on this route.' It's not uncommon to see sixty knots of wind. 'At what point do you cancel the trip?' We don't sail if the seas are more than six meters (19 feet).. 'Do the windshield wipers ever have trouble keeping up?' Sometimes you can't see a thing . . .. However, on our crossing the sea was as calm as one could ask for, especially considering that the Pacific Ocean, the Tasman Sea and the Southern Ocean all meet at this spot.
Posted by Neal aboard Rutea at 11:08 PM