Our ferry was met by Robin, the manager of the Bay Motel, where we would spend the next two nights. He drove us and the four other guests that had sailed over with us around the microscopic town of Oban, home to 340 full-time residents and up to 40,000 visitors in any given year. Robin pointed out the restaurants to avoid and gave us advice on which tours were worthwhile. Our room turned out to be a sumptuous affair, especially when compared to the cramped quarters of our tent and the view of the bay from our room was nothing short of the ultimate picture postcard of a small, calm fishing village. New Zealand, as an island nation, lays claim to quite a few other islands, Stewart Island being one of them and the nation's third largest. It's roughly the same land mass as the country of Singapore but unlike Singapore, 85% is a wildlife reserve. The small town of Oban is one of the most southerly towns in the world and Antarctica isn't that far away. 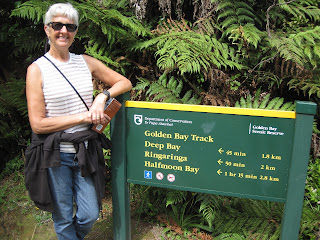 Once settled, we began to walk around. Our first stop was at the Department of Conservation's information center, which was just a few steps from our room. A very helpful woman told us about what we could expect to see - the only problem being was that everything on her list of 'must see' places and things involved hiring a guide or boat, which was all outrageously expensive. In the end, we just went on hikes around the village and didn't see anything that we couldn't have seen on the North or South Island. We were glad we went but it holds no magical memories of the rare bird or unique geographical formations and, on top of that, it did consume a significant percentage of our travel budget.

Once back across to the South Island, we pitched our tent at a holiday park right in the middle of the town of Invercargill. We walked from there to a pizza restaurant where we met our friend Bob on the MacGregor 65, Braveheart, which is currently tied up at Marsden Point. It was fun to connect with him as he 'jumped' from Mexico around the same time we did. He had driven down the west side of the South Island and we listened closely to his experiences, especially those where he encountered New Zealand's most vicious bird of prey, the dreaded Sand Fly. 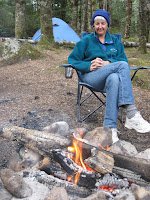 It was raining the next morning was we broke camp and that was depressing. There's no way to dry out the things that are wet and no way to keep the things that are dry from getting wet. On our way out of town we stopped at a Starbucks but their coffee wasn't as good as we remembered it from the States. As we arced around the southwestern corner of the Island, we gradually picked up a northerly course towards the famous Fiordland and Southern Alps. Our guide book told us of a campsite 17 kilometers down a dirt road so we decided to check it out. With a tall cloud of dust coming up from the back of our minivan, we found our way to the south end of Monowai Lake and a charming little campsite. Even though it was as primitive as any campsite could be, we kind of felt like we had hit the jackpot as it had almost everything we wanted: No one around, right beside a beautiful lake, a flat spot for our tent and it was quiet. That afternoon gave us a good hike, later an excellent dinner and it was followed by a peaceful night's sleep. We had another nice, short hike in the morning with steaming cups of coffee in our hands as we watched the mist rise off the lake's surface. Breaking camp once more and heading out, this time towards our entrance to Fiordland.
Posted by Neal aboard Rutea at 12:43 AM