What's Going on in Sydney?


My friend, DB, recently wrote me to complain that my blog posts were too far and too few between.  If I had a good excuse, I'd write it here.


From my casual observation, it appears that Sydneysiders will do almost anything for a party.  A good example was the Chinese New Year's Parade where over 100,000 people packed the parade route to celebrate the Year of the Snake (last year was the Year of the Dragon and next year is the Year of the Horse - Ruthie and I were born in the Year of the Horse).  There was a lot of partying going on but people seemed well-behaved.  It was a family-oriented event.

What was definitely not a family-oriented event was Sydney's Mardi Gras Parade which is in it's 35th year and is Sydney's Gay Pride parade.  Over 700,000 people jammed the parade route for this event and I think that Ruthie and I were the oldest ones there.  Even though there was a huge police presence, they seemed to keep a low profile.  For example, I saw a police officer approach two women who were drinking beer on the street which is against the law.  The officer suggested that they keep their beers in a less conspicuous manner.  Since it was so hard to see the parade through the throngs of people, Ruthie and I left after less than an hour but it was great to see how well the GLBT community was supported.

We have done our share of partying but we've also enjoyed a lot of the sights around Sydney.  Yesterday, we went to the Art Gallery of New South Wales, which is almost in the center of Sydney's Central Business District.  Our primary interest was to see some of the Aboriginal art but they also had a fairly decent collection of European artists as well including Picasso, Monet, van Gogh and Rubens.

We were prohibited from photographing the Aboriginal art but it was easy to fall in love with.  Very small dots of bright colors formed patterns on large canvases that could have been someone's vision of what the earth may have looked like from an aerial view.

From the Art Gallery we strolled out to Mrs. MacQuarie's Point, a prominent point of land in Sydney Harbour that offers spectacular views of the Opera House and the Harbour Bridge. 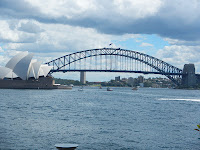 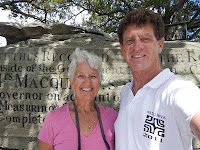 The park at the end of Mrs. MacQuarie's Point joins Sydney's enormous Botanical Gardens.  Its immaculately groomed and thick with exotic plants and flowers.  They even have a Garden Shop and it took a great amount of effort on my part to keep Ruthie from going inside.  Several weddings were taking place simultaneously but the space is so huge, I'm sure that the weddings didn't know that each other existed. 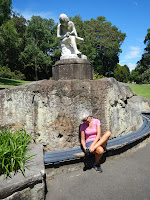 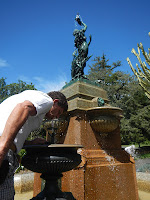 It had rained hard the previous week and we were eager to get off the boat for a walk.  Our guide book talked of a 5.5 kilometer walk from Cooggee to Bondi and the bright, late summer sun made the stroll glorious. 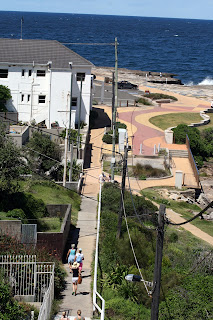 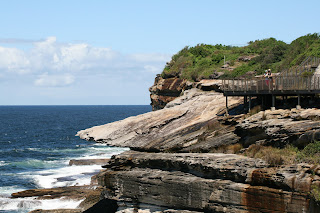 Alas, our days in Sydney are drawing to an end.  Cyclone season is just about over (although there are two rather nasty ones in the Coral Sea as of this writing) and we'll turn Rutea around for our trip back north.
Posted by Neal aboard Rutea at 12:45 PM