Manly to The Spit 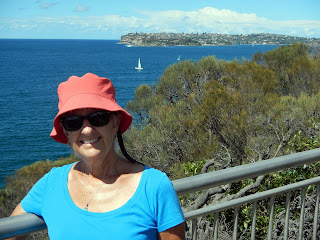 I had been exchanging emails with our friend, Behan, on the Stevens 47 Totem (if you want to read about real cruisers or read a real blog, visit www.sv-totem.blogspot.com - the rest of us are just imposters) and she was asking if we had hiked the Manly Scenic Walkway.  I replied that we had walked that way many times but it was a dodgy answer to her question as we hadn't walked the entire way, just parts of it.  Not wanting to lie to a good friend, Ruthie and I set out this morning to complete the 20-kilometer round trip walk.

The walk starts in the charming town of Manly, a bedroom community of Sydney, which lies in the northeastern corner of Sydney Harbour and the trail winds around the edge of the Middle Harbour before heading inland and then back towards the bay.  The track is well marked and well groomed - there's no chance of getting lost but it does gain and lose a fair amount of elevation.  I didn't count how many steps we went up and down but it was probably in the hundreds if not thousands.  Being a Tuesday, we met a few other trekkers but I bet it's quite crowded on weekends.

It took us about two-and-a-half hours to make it to The Spit Bridge, where we picnicked and rested for a few minutes.  The Spit Bridge opens several times a day to allow tall boat traffic passage but, alas, our timing didn't allow us to see that action. 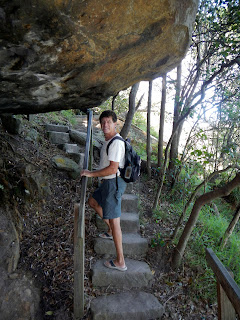 Even though the hike back to Manly was just as long as the walk to The Spit, it seemed quicker.  The entire Manly Scenic Walkway is within the city limits of Sydney but much of it felt as though we were a long way from civilization. 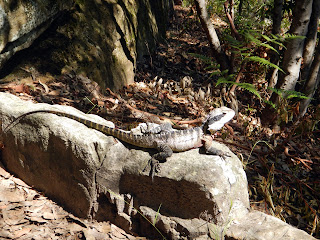 I hope we do the same walk again as it was beautiful.  Next time, though, I'm wearing real shoes instead of flip-flops!

Posted by Neal aboard Rutea at 5:24 AM