The balance of our trip through the South Island included a quick visit to Fox Glacier but we skipped Franz Joseph Glacier altogether.  After four weeks of traveling, I was starting to become a little jaded by how it appeared that New Zealand leveraged even the smallest attraction into a tourist destination, complete with café and gift shop.  Boulders on the beach?  Gift shop and café right there.  Old suspension bridge?  Another café and gift shop.  I’m not cynical towards gift shops or cafes but I was beginning to tire of it.  I almost let my cynicism get the best of me as we were pulling into Pancake Rocks (more rocks by the beach, right?  Great!  I haven’t seen those before!) but I found the formations fascinating and beautiful.
We worked our way up to the famous Abel Tasman Park which is a huge chunk of the northwestern corner of the South Island.  We found a funky holiday park, rented a very small cabin and booked reservations on a water taxi to take us deep into the Park.  We had to walk quickly to the water taxi depot which was a small store front on the main road that runs through town.  Shortly after we had checked in, an old agricultural tractor pulling a 20’ launch on a trailer pulled into the parking lot and we boarded the boat.  The tractor and driver then drove us through the town to the boat ramp, backed the boat with all the passengers into the water and while he climbed aboard to become the captain of the launch, someone else from the company drove the tractor and empty trailer away.  The ‘taxi’ had several stops to make along the way to our drop-off point and we got familiar with the routine:  The launch would power in close to shore, anchor the bow out and back down, tilting the 200-horsepower outboard up and then deploying a passerelle (gangway) once we were up against the beach.  If you timed it right, you could jump off without getting your feet wet. 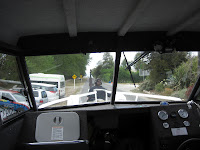 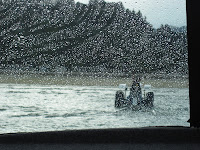 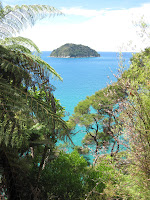 The water was a beautiful color and we really enjoyed our hike but much of the trail went inland where the scenery was no different than the daily hikes we take around Whangarei.  Once back aboard our ‘taxi’, the wind and rain had filled in and we were glad to have the minimal shelter the boat provided even though we were being bounced around pretty good.  The tide had receded substantially by the time we got back and the ramp that we had used on the way out was now useless.  But there, out in the middle of the bay was the same tractor that had launched us, sitting in water that came up over it’s axles.  How the skipper was able to find the trailer was a mystery to me but we were soon underway, the bow of the tractor creating a wake as it motored towards shore.  It rained very hard that evening and we felt smug with our decision to not pitch the tent. 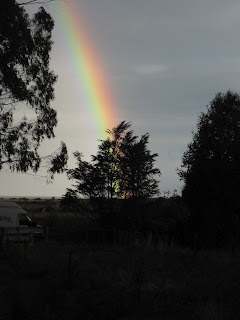 The next day we drove back to the Fromm Winery in Blenheim where we bought a case of wine.  From there we caught the ferry at Picton that took us across the channel and back to Wellington, the rain pouring heavily the whole time.  Arriving right at the height of the afternoon’s rush hour, we navigated our way to just north of town and rendezvoused with our friends, Fred and Cinda, from the steel sloop, Songline.  We talked for a couple of hours and then got back on our way north but driving in the heavy rain at night on the narrow road was tiring so we found a cheap motel.  A nine-hour drive the next day and we were back on board Rutea.  Corie had gone on a surf trip so we were still alone for a couple of days, other than our cruising friends on boats nearby.
Posted by Neal aboard Rutea at 9:31 AM