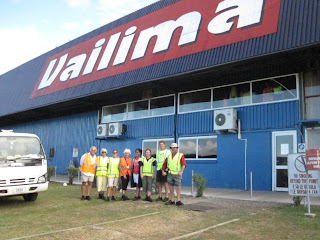 Notice Our Very Stylish Footwear!
In the Samoa Visitor Guide, a  4”x8”, 100-some-odd-paged color pamphlet filled with advertising and things to do and see in Western Samoa, I found the entry for the Vailima Brewery.  It said that while no formal tours are available, if you call the brewery they will arrange a tour.  The receptionist spoke English but with a very heavy Samoan accent so it was difficult to understand her.  I did understand that she wanted me to send a letter requesting a tour to which I sputtered that we were on yachts, just visiting for a few days and departing soon.  She then asked if we could come next week and I repeated that we would be gone by then.  She then asked if I wanted to talk with Production or Engineering and I said whoever could arrange a tour.  After being on hold for too long, she came back on the line and asked me to call back later.  I persisted and was finally granted a tour at 3pm that afternoon.
Ruthie, Corie and I plus two other couples from other boats climbed into a 10-passenger taxi, with me riding shotgun in the left seat.  The driver’s name was Rambo.  We arrived at the brewery a few minutes early which was a good thing as they were disappointed that all of us were wearing flip-flops (everybody wears flip-flops in Samoa) – safety rules require steel-toed shoes inside the brewery.  No worries, though, they brought out very fashionable steel-toed shoes for everyone, along with fluorescent-colored safety vests – also required.  If the plant was in the production mode, we’d also need hard hats and safety goggles but they had met their target so the production side was shut down for the weekend.  We still had to wear hearing protection inside, though.
Our tour guide was Iki (pronounced ‘Icky’) and she is also one of the plant’s microbiologists.  By no means a large brewery – compared to many – it still employs over 130 people and runs 24 hours per day.  They also bottle Coke, Sprite and Fanta on the same production line as their beer.  Unfortunately, no photographs were allowed to be taken inside the brewery and I missed some great shots of the mammoth tanks that hold the wort, grind the malt and age the ‘bright’ beer.
At one point, Iki opens a valve at the bottom of a large, cone-shaped vat and into her hand pours a tan-colored goo – the yeast they add to the sugared wort which feeds on the sugar and converts it into carbon dioxide and alcohol.  It tastes sweet.  Towards the end of the tour, we stop in Iki’s lab (where she spends most of her time) and she pours us all a taste of Vailima Lager.  It has a mild hop flavor, a slight earthy aftertaste and an alcohol content of 4.9% - the maximum allowed by Western Samoan law.  However, they also brew a lager for export which has an alcohol content of 6.7%, which I like much better.  We bought five cases of the Export in American Samoa before we left there.
Once the tour was over, I had the receptionist call Rambo to pick us back up.  The seven of us stopped at the little restaurant across from the marina for, what else?  A cold Vailima.  Which turned into two cold Vailimas and was then followed by an excellent serving of fish and chips.  On our way back to Rutea, we stopped to chat with Christof and Helena on Valentina, a 36’ Bavaria from Finland.  They convinced us to come aboard and have a gin and tonic with them.  With a smile and a wink, Christof said he doesn’t believe in canals so they sailed around Cape Horn to get to the South Pacific.  They plan on sailing around the Cape of Good Hope to get back to Finland.
Three boats left this morning for Savai’I, the largest of the Western Samoan islands.  I was kind of curious as to how they were doing so I called Whistling Oyster on the VHF.  “We’ve got easterly winds, 20-30 knots and big, confused seas,” said Martin, “but other than that, it’s not too bad.”  We’re going to wait to leave here until Wednesday when the weather is forecast to be milder.
Posted by Neal aboard Rutea at 4:38 PM