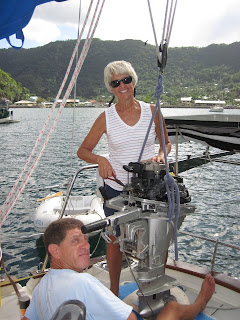 Will it ever run again?
We reached a significant milestone on Rutea today when Ruthie and I got the outboard running again.  The raw water impeller failed (it was only 10 years old!) when we were in Bora Bora but the spare that we had on hand was the wrong part and we could find no replacement.  This means we’ve had to row our dinghy everywhere or count on the generosity of other cruisers to give us a ride.  Not only does our dinghy row poorly but we’ve had issues with oarlocks.  Ask me about our sad oarlock stories some day over a couple of cold beers. 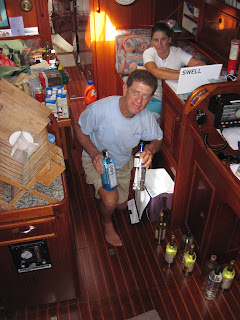 All the important stuff . . .
Yesterday we did a major provisioning and we were working out the details over the radio with another boat.  When Pete on Down Time, heard our dilemma, he chimed in to shuttle us back to Rutea when we had finished our shopping.  We took the bus to the Cost-U-Less store and after spending far too much and loaded with huge boxes of food, we hired a taxi to take us back to the dock.  We called Pete as he told us to but he didn’t answer.  Lucky for us Bob on Braveheart had been lurking on our conversation and came in his dinghy.  There wasn’t room for all of us and the food too! 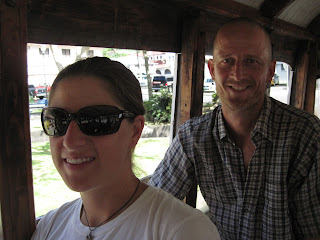 Corie and Lars on the bus
With the dinghy repaired, we’re now free to move about the ocean again.  Even though we’ve been here nine days, it seems like we haven’t scratched the surface of exploring the place.  The bus system here makes it so easy to go places plus they’re an adventure in of themselves.  There are hundreds – maybe thousands of buses – on this small island.  They are all independently owned, operated and decorated.  Most of the chassis for the buses are either Toyota pickup chassis or for the larger buses, perhaps a full-sized Ford truck chassis but the coaches are made locally out of wood.  Most have plywood seats and vertical seatbacks – they’re wide enough for two skinny people or one Samoan.  Many of them have a DVD player at the front of the bus and rock concert videos are popular.  The outsides of the buses are often painted wildly or sometimes have a more polished warning about drinking and driving.  Most of the buses have names with something in Samoan the most common but others will have religious sayings and some will have the names of cartoon characters.  The drivers honk their horns often and it’s not unusual for a driver to get off their route to drop a passenger off at their home or work.  You pay when you get off the bus and the fare is always $1.00 regardless of how long you’ve traveled.  We have found the drivers to be pretty safe but with a 25 MPH speed limit for the entire island, it not likely that someone would get carried away. 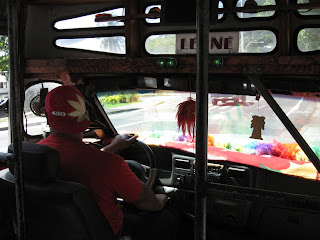 '420' Baseball Cap on the Bus Driver
We’re thinking about heading to Western Samoa on Wednesday or Thursday.  Our guide books and the anecdotes from other cruisers have been positive.  Plus, I’m getting ants in my pants.  We’ve enjoyed Pago Pago but it’s time to move.  Plus, we need to make our jump to New Zealand in about 10 weeks and there are lots to see before we head there.
Posted by Neal aboard Rutea at 6:14 AM