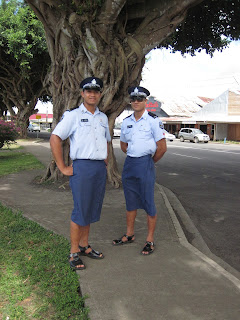 Local Police
OK!  You figure out where we are!
Most people arrive here by air as it is located in The Dangerous Middle!  Mother’s Day and Father’s Day are observed on a Monday and taken as a Holiday!  We are GMT minus eleven hours.  The policemen wear lava lavas.  There are over 18,000 Matai (Chiefs) in over 362 villages.  Driving is done on the left side of the road.  Robert Louis Stevenson is buried here.  Home of the award winning Vailima Beer and home of traditional Fire Dancing.  Host of the only marina west of Papeete and east of Figi, paid for in Tala.
Mai fea?  Loe!  You guessed it!  The motu of Samoa where Fa’a Samoa (the Samoan Way) still continues to thrive!  We have been welcomed to the heart of the south pacific where the pace of life is gentle and traditional social customs still preside.   Considering that the western Missionaries have been the most powerful agent of social change here –ever- Samoa keeps a foot in both the traditional and modern worlds.
From our marina slip (the first one since Mexico) we can see the Beach Road of Apia along which are cell towers, malls, banks, hotels, Consulates, a clock tower and tourist bureau.  We can also see the painted, long canoes practicing their paddling on the harbor to the beat of a drum!  Just behind the new buildings are the old flea market, fish market and ramshackle shop after shop of Chinese goods packed so full that you can hardly squeeze down the aisles!
Aside from the National Park, all land outside of Apia  is owned by extended family units whose head is a Matai.  When visiting just about any beach or waterfall you need to ask permission of the local chief.  Village protocol extends to only quiet activity on Sundays, no activity during prayer curfew (6-7 in the evening), when sitting in a fale (house) only sit cross legged- never point your feet at someone and of course, never wear skimpy clothing or your host may be fined!
The big city is a bit of a different story!  The people here hustle!  Aside from seeming to work hard, we are constantly approached to see if we are in need of or want something!  I think Corie has received more requests for dates in the past 24 hours than she has in her cumulative dating life!  Although city attire is fairly traditional we have still seen many bare knees and shoulders and the kids don’t hesitate to whip off their lava lavas (under which are shorts) to snap it at another kid!  Everyone has a cell phone up to his ear but that doesn’t stop almost everyone we pass from saying “hello!”.
We are once again on a learning curve in a new country.  We are trying to figure out what to do and see here,  how best to travel around the island, where to shop, what to eat and how to read between the cultural lines when people offer their services (especially Corie!)!  It’s fascinating and overwhelming all mixed up together like a hot, spiced, tropical stew!  Fortunately for me, we have the luxury of thinking all this out within the comforts of home, surrounded by things familiar.  Tomorrow being Sunday (when everything stops) we will get out the guide books and plan how best to enter this next tropical paradise and once again, go figure!
R of Rutea
Apia, Samoa 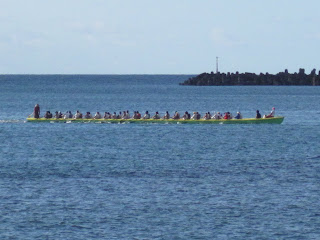 Posted by Neal aboard Rutea at 6:24 PM