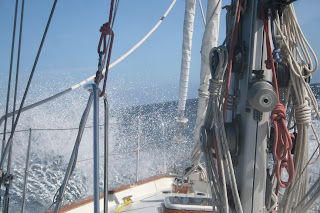 Photo taken by Corie en route to Frailes
We collect weather information from a variety of sources before we head out.  One of our favorite is from a man by the name of Tom, who generously gives his time to analyze and then broadcast his forecasts on the Chubasco and other maritime ham radio nets.   His call sign is  AA6TP.  Before we left San Jose del Cabo, I specifically asked Tom what kind of conditions we should expect for the 25-mile sail to Bahia de los Frailes.  Whereas Tom did say that waiting a day would be better, he said that the winds would be 10 to 20 knots out of the northwest.  It was bright and sunny as we got underway, the seas calm and I didn't even get too upset when the compass controller on our autopilot failed.  However, as we rounded Punta Gordo the winds began to build and soon they were steady at 30 to 35 knots.  Walls of water would come smashing at Rutea's bow and though she's tough and weighs over 40,000 pounds, the power of the waves held her forward speed to a crawl.  Her bow would point skyward as she climbed over yet another mountain of water and then suddenly point almost straight down as the wave left us as quickly as it had come.  With a reefed main flying, we short tacked up the coast as even a few miles off the shore the waves were significantly bigger.  What is usually a 4-hour hop stretched into an 8-hour roller coaster ride.  None of us felt well though nobody, well, er, um, 'fed the fish'.  The interior stayed remarkably dry though spray had soaked the outside of the boat thoroughly.  As we finally reached the anchorage, the anchor chain had been tossed around so badly in it's locker that it was a giant knot.  The wind continued to howl but by midnight had died completely.  The photo above was taken early in the trip because shortly after that, according to Corie, it got 'gnarly'.
Posted by Neal aboard Rutea at 4:07 PM