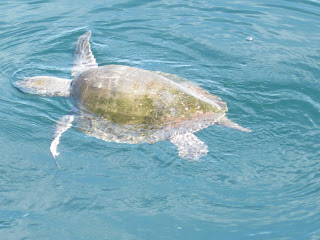 My New Facebook Profile Photo?
This post is actually out of order as I should have written about our trip from Mazatlan to Bahia Matachen (hours of boredom punctuated by moments of terror); our jungle cruise into the forest where huge crocodiles lie; our luxurious evening of cocktails aboard the motor yacht Mystic or the trip down to Bahia Banderas when we saw so many whales and turtles that most of us wouldn't even look up when someone said, "Big humpback breaching just off the port bow!".
Perhaps I'll make a future post of those things that happened in the past.
However, now we're in Bahia Banderas and this represents a major milestone in our cruise.  It  is here that the events take place for the Pacific Puddle Jump, the loosely organized series of seminars and parties for those heading to the South Pacific.  The first seminar is on Saturday - about abandoning ship in the event of an emergency.  Even though we're barely in Bahia Banderas, there's a palpable level of excitement we can feel over the radio for the fleet that's getting ready to depart.
Right now, we're anchored just off of Punta de Mita, on the northwest corner of this 17-mile deep bay.  It's famous for it's surfing and the off-the-charts luxury of the Four Seasons Hotel, which occupies the majority of the point.  Charming restaurants line the beach and tourists from all over the world work very hard at doing nothing other than absorbing the warm rays of the sun.
But all is not idyllic in this otherwise-seeming paradise.  We've had several equipment failures and I'm scrambling to find replacement parts and get them here.  It's a relief that I had wisely invested in a substantial spare parts inventory but now I'm replacing those spare parts with so much useless junk.
Ok, my turn in the shower, if Corie hasn't used up all the water.
Posted by Neal aboard Rutea at 5:02 PM