We arrived in Darwin, the capital city of the Northern Territory, on July 7 at 0400, after sailing more than 2,500 miles since we left Sydney in New South Wales.  The last month has been kind of a push for us but it hasn't been without it's highlights as we've had several adventures that we'll never forget.  One of the most indelible was spending several days at the Aboriginal village on South Goulburn Island.  Landing ashore is prohibited unless you secure a permit beforehand and through a friend of Corie's, we were able to get permission to visit.  For a well-written account of our stay there, please read Corie's blog.  There's a link to it at the top of the page.

Back to Darwin:  With a population of about 130,000 people, its a bustling city with more than it's fair share of pubs.  The day after we arrived, we spent part of a Sunday afternoon drinking cold beer in the air conditioned comfort of Shenanigan's, one of the larger and more popular establishments.  Since Darwin is so close to the equator, it remains hot even in the 'winter', in fact, the seasons here are classified as 'wet' or 'dry' and not summer or winter.  We're in the middle of the dry season now.  We moved Rutea into the Tipperary Waters Marina but we had to go through a lock to do so as the tides are often in excess of 7 meters.  The lock can't handle boats much larger than Rutea and my heart was going pitter-patter as I tried to navigate against a strong wind and stronger current.

Not much time was wasted before we got started on boat projects since we don't anticipate being able to accomplish much once we get to Indonesia.  Our To Do list is long and I worked for several days straight but still didn't manage to get to anything on the list.  It is better now but I still have lots to do. 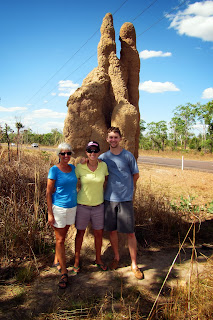 Today we took some time off from boat projects, rented a 4x4 and drove up to the Adelaide River, where we had booked seats on a river trip.  We had heard so much about crocodiles that we worried that we would leave Australia without seeing any.  The river trips are a little kitschy but we did get to see crocodiles up close - very close - but it was still worthwhile.  On our way back to the boat, we took pictures of the massive termite mounds.  Corie's friend, Kyle, is joining us as we sail through Indonesia.


Shortly after we got back to the boat, we barely had time to get cleaned up for the Sail Indonesia Farewell Bar-Be-Que.  As our time in Darwin winds down, the Sail Indonesia Rally events ramp up and almost 150 people showed up for a night of food and fun at the Darwin Sailing Club. 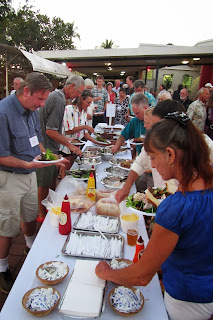 Posted by Neal aboard Rutea at 7:43 AM