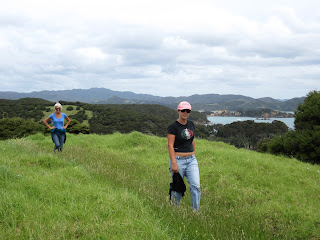 Hiking On Urupukapuka Island
Before we even left the tropics, we had decided to spend a week in Opua and then head on down to Whangarei.  But after just seven days, I wasn’t all that excited about leaving.  Many of our friends were there and more were arriving daily.  There was a palpable level of excitement as boats completed their passages from Tonga, Fiji, New Caledonia and other exotic ports.  After seven to ten days at sea, most new arrivals were looking forward to practice some ‘elbow bending’ at the Cruiser’s Club and they wanted people to listen to their sea stories.  We usually volunteered, enjoying several cold draft Montieth’s Ale while we listened to their lies and exaggerations.
Besides the camaraderie, the nearby towns of Paihia and Russell, which usually cater to vacationers from Auckland, offered a resort-like atmosphere in of themselves.  A steady stream of motorhomes and backpackers flowed through the streets but the cruisers always stood out amongst the crowd.  As spring is ending here and summer beginning, this is the start of the high season.  The retailers are optimistic. 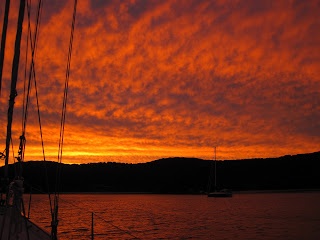 Hahangarua Bay
Almost reluctantly I checked out of the marina, the clerk not wanting to look me in the eye when I said we were going to Whangarei – a bit of rivalry between the two ports.  I paid our tab at the chandlery (“What?” said Ruthie, “The first marine hardware store since French Polynesia and you spend less than $100?  Are you feeling OK?”)  Ruthie’s snide remarks notwithstanding, we cast off at a moment of slack current and headed out into the Bay of Islands.  Our friends on Paikia Mist left just minutes before we did and we rendezvoused in Paradise Bay on Urupukapuka Island.  Once anchors were set, they came by in their dinghy and took us into shore for a terrific hike that almost circumnavigated the island.  We saw some absolutely breath-taking views along with some breath-robbing hills to climb.  Once back on the boat, the wind clocked to the southwest for which we had no protection so we moved over to Hahangarua Bay on Moturua Island and spent a peaceful night.  Late the next morning we pulled up the anchor and left the Bay of Islands, heading for our new temporary home of Whangarei.  The wind filled in to about 23 knots and it only took a few hours before we arrived at Mimiwhangata Bay, our stopping point for the night.  It’s a fairly well-protected bay but with 23 knots of wind, no anchorage is without movement.  The wind died later in the evening and stayed that way.  We pulled up the anchor at 0700, once more back at sea for the next 40 miles.  Once in Whangarei, it’s anybody’s guess as to when we’ll be back on the high seas.
Wait!  This just in!  We have confirmed eyewitness on-the-scene reports that Rutea has been spotted tied up to the wharf at Whangarei Marina.  Said one observer, who preferred not to identify herself, "I hope I get to see them.  They've come such a long way!"  Said another resident, who also didn't want to be identified, "Aye 'ope they don't drink all the floggin' beer in the city."  Stay tuned for further developments.
Posted by Neal aboard Rutea at 1:29 AM