The North End of the North Island 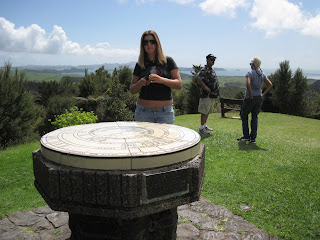 Top of Mt. Bledisloe
With our friend, Bob, eager to try out the used Nissan he just bought, we headed north out of Opua, past Paihia and to the Waitangi Treaty House, where the Treaty of Waitangi was signed in 1840.  The treaty was supposed to give the indigenous Maori people all the rights to the land and waters of New Zealand but it also made the Maoris subjects of the British Crown and therefore subject to British law.  It didn't take clever lawyers long to find ways to circumvent the treaty and soon the Maoris were treated like second class citizens with very few rights.  When we entered the museum, a very perky receptionist asked us where we were from.  "California!" we replied in unison.  Had we known that citizens of New Zealand get into the museum for free while foreigners have to pay $25.00 per person, we might have answered differently.  We didn't want to see that stuffy, old museum anyway.
Driving west we found the turnoff to Mt. Bledisloe, a very wealthy Brit who had the mountain named after himself.  It was a short hike to the top where a monument pointed to the direction  of various  cities around the world and their distances.  We're a long way from anywhere here. 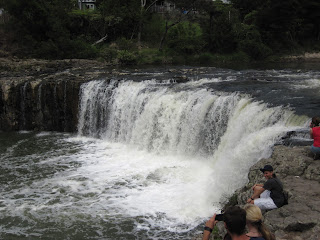 Haruru Falls
Continuing northwest, we stopped by Haruru Falls, which were pretty disappointing.  The falls themselves were less than spectacular and the water was dirty.  Ruthie refused to pose for a picture here.  In the parking lot we discussed where to go next and a quick check of Fodor's said that the Waipoua State Forest, with the largest tree in New Zealand, was a worthwhile stop.  Even though it was more than 100 clicks away, we decided to go for it.

We all agreed that driving through the New Zealand countryside was a lot like driving through the Pacific Northwest.  Thick pine forests on rolling hills with bright green pastures, dotted with fat cattle could have been in the northern Willamette Valley..  As we approached the northwestern corner of the country, the Hokianga Harbor appeared off the starboard side of the car.  This 'harbor' extends almost halfway across the North Island.  We stopped for lunch at a small cafe that overlooked the entrance to the 'harbor', which was fairly narrow for such a huge body of water.  It was also our first glimpse of the Tasman Sea, which was calm despite it's reputation for not being so. 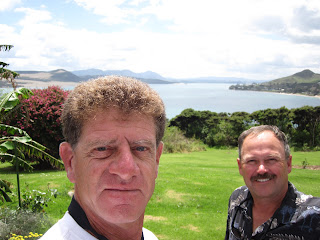 Hokianga Harbor
After lunch, we continued on our trek to find the tallest tree in New Zealand.  The road became windy and steep as Bob's Nissan with it's puny diesel engine struggled to keep us moving at a decent speed.  Fortunately, the area is very sparsely populated and we weren't holding anyone up who might have been behind us.  We parked near the massive tour buses that had found their way to the same famous spot. 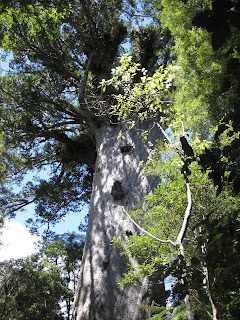 Tane Mahuta, the Lord of the Forest
Even though the kauri tree is only 173 feet tall, it does have a circumference of 45 feet and is somewhere between 1,200 and 2,000 years old.  The New Zealand government goes to great lengths to protect the tree which, apparently, has very shallow roots which are susceptible to viruses.  The tree is kind of out in the middle of nowhere but it's well fenced off and there's a raised wooden walkway all the way from the highway to protect people from walking near it's roots.
Our trip back to Opua was uneventful but the tide had changed and the entrance to Hokianga Harbor was now white and frothy with tidal-generated waves.  I was struck by how peaceful everything seemed.  Even the occasional on-coming car seemed peaceful, even though it was on the wrong side of the road.  Perhaps I'm just looking for an excuse to stay in one place for a while after so much traveling but I like it here.  I like it a lot.

Posted by Neal aboard Rutea at 2:01 AM