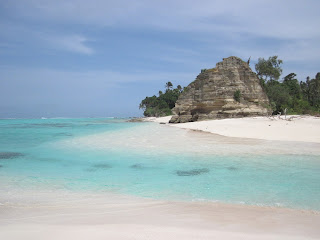 Kelefesia Island
We had spent a few nights anchored off of Uoleva Island in the western Ha'apai Group. The snorkeling was great and in the same anchorage were some of our closest friends. Beth and Norm on Sarah Jean II were kind enough to host dinner for all of us so we could celebrate Yuka's thirtieth birthday and say good bye as some boats were staying and some were moving on. We were in the latter group. 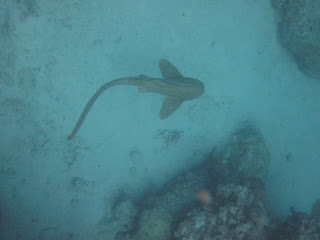 Leopard Shark
You would think that we'd be accustom to saying good-bye to people by now as we do it so often. We meet people on other cruising boats, become close friends and then part ways - often to never see each other again. But saying good-bye to the people on Merkava - Mark and Yuka - and Archetuethis - Christine and Jared - was just a little more poignant as we had become good friends with them when we were still in Mexico. 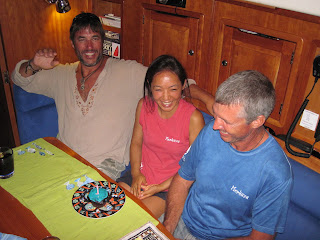 Yuka's 30th Birthday Party
Regardless, on the following morning at a decent hour, Sarah Jean II and Rutea pulled up our anchors and sailed seventeen miles to the west to the island of Ha'afeva. Coral dotted the sandy bottom and it made me anxious as it's very common for an anchor chain to get wrapped around a coral head, preventing the boat from retrieving its anchor - you never really know until you try to leave. The cool thing about the anchorage at Ha'afeva is that there's a wrecked Korean fishing vessel that met its demise on a reef near by. Since our dinghy is easy to deploy, we picked up Beth and Norm and the five of us snorkeled around the wreck and the reef responsible for sinking the ship. It was very interesting and at the same time a grim reminder of what can happen out there. 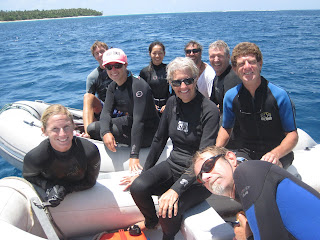 G
Group Snorkel Trip
This morning we got up at 0-dark-thirty, pulled up the anchor (it came up easy!) and continued to make our way south. Dawn broke to a sky that was heavily overcast but the wind was light so I hoisted the main sail up full. We were motor-sailing along and I was checking in to the Southern Cross Net (8161 KHz at 1830 UTC) when out of the blue twenty knots of wind from the northeast hit us. I scrambled up to the main mast and quickly tucked a reef in. Ruthie and I unfurled the genoa and cut the engine. Our course was close enough to the wind that Rutea was heeled over hard, her new portlights under water most of the time. The seas quickly built and the rain started to fall. Rutea's bow would rise up and over a wave, sending a geyser of water skyward as it landed. Gravity would take control of the geyser of water and with the wind's assistance, deposit it all over the deck and cabin. This went on for most of the morning.
Shortly after noon, we approached our destination of Kelefesia Island, the most southerly of the Ha'apai Group. This island is out in the middle of nowhere. Our two guide books differed on the dangers when approaching the anchorage and the charts mentioned 'Blind Rollers' surrounding the entrance. The wind was still honking and we were even discussing skipping Kelefesia altogether as it was sounding a little dicey but we pressed on. Our collective pulses quickened as we powered into the narrow gap between the reefs on either side where it seemed like waves were breaking all around us.
Once the anchor was down and set we took stock of our surroundings. The palm tree-topped cliffs met a wide, sandy beach which faded into the perfectly clear water. The water gradually changed from clear to pale blue to aquamarine. Before we entered the anchorage, I was skeptical that it would suffer from swells entering as they were breaking so close to the entrance. However, I was pleasantly surprised when I found the motion in the anchorage to be better than tolerable. No other boats were there - just Sarah Jean II and us - no other people were on the island, either. There's a small fish camp on the east side but it was deserted. 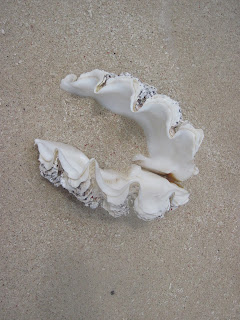 G
Giant Clam Shell
It didn't take us long to get into our snorkel gear and check out the reefs that we had just sailed past. Unfortunately, much of the coral was dead and the snorkeling was pretty uninteresting. We did, though, walk ashore where we found many giant clam shells - the ones that are almost two feet across. Since we follow the Sierra Club's rule: 'Take only pictures; leave only footprints', we left all the shells on shore.
All of us were a little troubled that we almost skipped Kelefesia Island as it's a remote gem - just the idyllic, deserted South Pacific island that so many dream of and rarely find. We leave tomorrow morning for Tongatapu, the capital of Tonga.
-----
At 10/15/2011 6:26 AM (utc) Rutea's position was 20°30.13'S 174°44.45'W
----------
radio email processed by SailMail
for information see: http://www.sailmail.com
Posted by Neal aboard Rutea at 11:30 PM