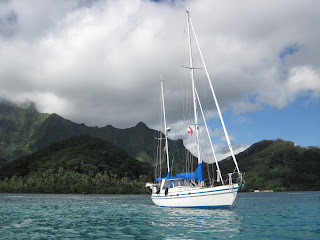 Rutea Anchored Just NE of Toamaro Islet
Raiatea in the Background
We have generally had good success using the Guide to Navigation and Tourism in French Polynesia, which is now out of print but still available if you persist. However, their description of the anchorage off of Toamaro Islet we found to be incorrect. They describe it as an 'excellent anchorage' but advise that you arrive in the daytime to select your spot (duh). The islet itself is a narrow strip of land, about half a kilometer long and completely covered with coconut palms. The water shoals gradually closer to the islet and closer to the outer reef, which is almost a kilometer away. We did select a spot to drop our 30-kilo Bruce anchor that was free from coral in about four meters of water and about 300 meters from the islet - I paid out about twenty meters of chain, backed down at about three-quarters throttle for a solid four minutes, making sure we had a good set as we always do. Corie snorkeled over the anchor and reported that it was well-set. The wind was fairly light out of the east at about ten knots but the current was strong enough from the west that Rutea's bow was pointed that direction despite the wind. As the wind increased to fifteen to eighteen knots, Rutea's attitude didn't change. Since we hadn't moved since we dropped anchor in the early afternoon, I went to bed confident that we were secure for the night. At about 0100 hours, I woke and was watching the depth read out that we have in our cabin (which reports depth of water under the keel): eight feet, nine feet (okay with me), twelve feet (huh?), eighty feet! Yes, the sand shelf drops off that fast. I can't remember the last time we had our anchor drag - it's been years - but we got ourselves organized quickly and attempted to reanchor in the pitch-black morning. Even with radar and first-class depth sounders, anchoring in the dark in a strange place with large coral heads all around is tricky at best, disastrous at worst. At one point I asked from the bow of the boat how deep it was and Corie reported back that there was six feet under the keel - which was perfect so I lowered the anchor. In fact, she had said it was sixty feet deep but I had misunderstood her. This meant that I had to retrieve the anchor, move the boat into still shallower water and try again. After several intense minutes we had the anchor down and secure. We maintained an anchor watch until dawn. It was 0700 when I got up and heard the sound of the boat hitting coral hard. I flew into the cockpit where I found the shock cord I use to secure the steering wheel had it's sturdy stainless steel ends bent around backwards as easily as if it were a paper clip. We immediately pulled up our anchor and left through the Toamaro Pass where we faced huge breakers on either side of us. Once we got to our current anchorage off the island of Taha'a, I dove in the water to inspect the damage to the rudder. Even though the paint on the rudder is badly scratched, nothing is broken which is a solid testimony to Rutea's construction. In retrospect, I don't know what I'd do differently nor can I understand why our anchor didn't hold in the first place but I think it's safe to say that it had something to do with the unusually strong current. I would recommend that cruisers avoid using this as an overnight anchorage.
-----
At 7/4/2011 4:08 AM (utc) Rutea's position was 16°36.98'S 151°32.72'W
----------
radio email processed by SailMail
for information see: http://www.sailmail.com
Posted by Neal aboard Rutea at 9:28 PM