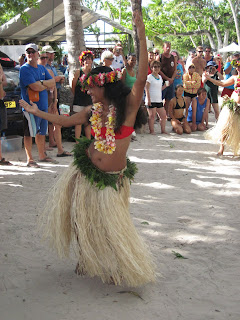 Moorea, French Polynesia
The art of Polynesian dancing is alive and well.  It seems that almost any celebration, regards of how small, warrants a troupe of at least three dancers and their accompanying musicians.   Right now, early July, is the ‘heiva’, a period of a few weeks where villages compete for top honors in dancing, singing – even volleyball.  Last night we attended one of Bora Bora's local village’s presentation where probably over a hundred dancers performed.
I find the dancing mesmerizing.  Of course, they’re supposed to tell stories of the past but just the fact that they still practice and teach this part of their culture I think is a huge victory over the damage caused by the European’s arrival almost three hundred years ago.  The intensity at which they perform, the lack of inhibition – their pride is almost palpable.  Besides, the stunning beauty of it nearly brings tears to my eyes.
Is it any wonder that I find the women’s dancing more attractive?  Whether their costume is a grass skirt and a coconut shell top or a more demure dress, they always have a beautiful crown of bright flowers.  Their graceful hands will sweep away, come back to their lips, rise over their heads and point out again, their fingers almost beckoning.  Often they’ll look down but then they’ll look skyward as if beaming to the heavens.  All done in perfect timing to the music – sometimes just drums but often accompanied by ukulele and guitar.  And then there’s their hips.
How they do that with their hips is a mystery to me.  Sometimes it’s slow with their bottoms doing perfectly round orbits.  Sometimes it’s fast with their hips like two pistons going up and down on a high speed engine.  When they’re in this mode, their upper body is almost stationary but the grass skirt is being tossed as if it was connected to a paint shaker.  I can only imagine that this is terrific aerobic exercise but their faces always remain very serene.
The men’s dancing is typically much more aggressive and sometimes involves slapping of the thighs and chest.  Often the men will shout and it’s easier to assume what the dance is about - perhaps a warrior’s victory or a battle long ago.  Most of the male dancers have physiques that men like me can’t imagine ever having; their large tattoos of beautiful Polynesian graphics notwithstanding, their massive arms and legs are fiercely powerful – their stomachs look like those in the advertisements for the miracle workout machine that never gets used.
A wide range of music accompanies the dancing.  From almost plaintive songs to a staccato beat on drums that must take incredible strength to keep up as long as they do.  We’ve been fortunate to hear some very accomplished musicians whose timing seems to be flawless.  Sometimes it’s almost surreal to hear the drumming coming from some unknown part of the jungle, wafting over the anchorage where we happen to be.  We’re looking forward to see how the dancing and music differs in other parts of the South Pacific.  Our plan is to leave French Polynesia this weekend or early next week.
Posted by Neal aboard Rutea at 2:23 AM