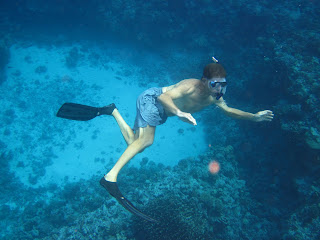 A Spectacular Grotto﻿
The anchorage at Anse Amyot on the north end of Taou Atoll had filled up, mostly with boats we knew. Our good friends on Songline had taken the mooring just off our starboard beam and we could shout at them if we chose. The wind continued to blow between 15 and 20 knots but the extensive reef at the south end of the bay kept the fetch from the atoll down to a minimum. Soggy Paws, the CSY 44 sloop in the mooring just to the north of us, had invited us to join them on several dive/snorkel trips to some hard-to-find spots that they had located on a previous visit. The underwater visibility was good but we agreed that it couldn't match that of Makemo where we had excellent visibility of almost 100 feet. 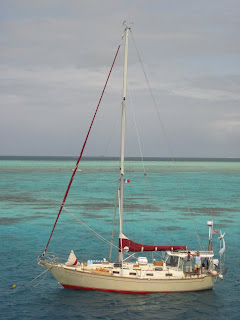 Fred and Cinda Aboard Songline﻿
The steaming light on Rutea's main mast wasn't working so I got out the block and tackle rig and Ruthie hoisted me up the mast. While I was there, I took photographs of some of the boats in the anchorage and printed them out and gave them away as gifts. The shots came out great and gave the boat owners a unique perspective on their boats; an almost aerial view of their boats moored in pale blue water with the dark green of the palm tree-lined beach in the background.

Alas, it came time for us to move on and we made preparations to get underway. The trip from Taou to Tahiti is 240 miles or two overnights as we often measure our passages. Since we wanted to arrive in Papeete in the morning, we chose to leave Taou just at sunset. Our waypoint had us heading west and across the north end of the atoll with just the genoa flying, we made good time and enjoyed the protected waters but once we got out into the open, an uncomfortable southerly swell of four to six feet would often set Rutea on to her beam ends. Being our first overnight passage in a while and rolling more than we find acceptable, none of us got much sleep.

The next night the prevailing easterly winds had lightened to the point where our speed dropped enough that it warranted running the engine. We motored the rest of the way to Papeete and arrived just before daylight. The pass was very easy to clear and once again we found ourselves in the calm waters that are protected by a reef. Before we went to the anchorage, we decided to check out the quay downtown. In a way, it held some appeal as having the boat right in the center of town would give us easy access but after listening to the noise of a busy city for just a few minutes, we decided to head for the popular anchorage about eight kilometers away. The airport runway is at the water's edge and any boat with a mast height of over twelve meters must get permission to pass in front of the runway from the Port Director.

Even though the anchorage is crowded with boats from all over the world, we found a spot with good holding and not too far from the dinghy dock. Whereas it isn't as calm as the anchorages we had gotten used to over the previous three weeks, it was a welcomed respite after a 240-mile passage. I made us a big breakfast, we put the boat in 'anchor' mode and around noon headed into town.

Marina Taini has a very nice facility and maintains the moorings nearby. The docks have no slips, instead heavy ropes that are anchored to the bottom hold the boat's bow while the stern is tied to the dock, a version of Med-mooring. The dock where the mega-yachts are tied is particularly impressive. Several restaurants line the water's edge.

We took a short walk up to the shopping mall. The amount of traffic was ridiculous with a seemingly-unending flow of cars, trucks and buses. The supermarket rivals those of Southern California with long, well-lit aisles of cheeses, paté(a whole aisle of paté!), fruits, vegetables and almost anything else one would find in a world-class mega-store. Ruthie found a place to get her hair cut and Corie and I found a charming spot to have lunch.

That evening, we headed back into shore with our friends Beth and Norm off of the solent-rigged Saga 43 Sarah Jean II. The guide books say that in the center of town there's an area where 'trucks' set up as restaurants. We caught a bus and found the area easily enough: About fifteen large vans modified to be kitchens surrounded by tables serving everything from hamburgers to crepes with many serving Asian-style food. The place we selected had a large menu of galettas, a savory crepe filled with almost anything you could imagine: salad, fish, beef, cheese and/or vegetables. I chose the Viagra that was filled with spicy sausage and not only was it excellent but reasonably-priced which is hard to find in French Polynesia.
Today we started our official check-in into French Polynesia. The weather reports are calling for a super high pressure system to develop south of here and could bring winds of 40 to 70 knots. I think that means we'll be staying close to the boat for a while. It also means it would be an excellent time to read emails from our family and friends!
-----
At 6/2/2011 8:50 PM (utc) Rutea's position was 17°34.83'S 149°37.11'W
----------
radio email processed by SailMail
for information see: http://www.sailmail.com/
Posted by Neal aboard Rutea at 2:24 PM