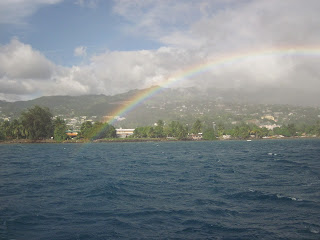 ﻿Papeete, Tahiti
During the Austral winter (June to September) there are strong winds that blow up to Tahiti from the southwest, then the south eventually becoming the kinder, gentler southeast trade winds. We saw on our grib files that there would be 20 to 25 knot winds from the southeast but thanks to Francois, a live-aboard here off of Marina Taina, we now know that the mara'amu winds funnel up this side of the island, between our anchorage and Moorea, and when the gribs say 25 to 30, the locals expect 40 to 60 knots! Oh, and these can last up to eight days! Right now the gribs are calling for four days.... So! That got our attention (and everyone else's in the anchorage) and for the past 48 hours everyone has been letting out more anchor chain, reanchoring, jockeying for position, lashing down canvas and, of course, provisioning with lots of good food because it's not going to be a good idea (or not even possible without getting really wet) to leave the boat! The winds hit us about 2:00 this afternoon and we spent the afternoon in the cockpit (as did everyone) watching boats drag anchor, lose things overboard, decide in high winds to pull their dinghies up on board and of course to making sure that we didn't drag anchor ourselves! It felt like a hurricane watch except that so far (gracias a dios) we haven't seen any winds higher than 30 knots, the wind waves here in the lagoon haven't been too bouncy and the rain squalls that have come through have showered us with more rainbows than rain! What is a bit disconcerting though, is to watch the waves crash against the reef at the lagoon edge because they are huge! There are twelve to sixteen foot seas out there!
It's a bit of a shock to be back in a big city again after being is such remote areas for the past couple of months! I told Neal that I didn't think we should attempt to cross any busy streets on our first outing past the marina gates! It's bumper to bumper traffic and everyone is talking on their cell phone! Of the 230,000 people that live in French Polynesia, over half of them live in Papeete- and everyone drives! We walked to a super store and the choices of goods was overwhelming! We just stood there star-struck (feeling very inept) and stared at aisles of French cheeses, pates, meats and fruits and vegetables! Of course, then you have to figure out the grocery store routine so that you don't get up to the cash register and get sent back to fruit department because you didn't get the apples weighed and priced in the fruit section or so you remember to bring your own bags because the stores do not provide ANY bags for groceries and you have to end up putting your checked out goods back in the shopping cart one by one, pushing the shopping cart back to the marina and unloading your goods into the dinghy.... one by one....
OK- the wind is down to 20 knots and I just checked and we have still not dragged anchor! I can barely make out the outline of Moorea against the darkening sky and I can hear the roar of the breakers on the reef! It is amazingly beautiful here! Tahiti is a velvety green island whose peaks are typically shrouded in clouds. The ocean is a royal blue and the water near the reefs, an aqua blue. Coconut palm trees line the shore and the people are gorgeous! I can smell flowers from the boat! Very exotic! We have only been into the center of Papeete once since we arrived because we have been busy! I can't remember right now what we have been so busy doing .... but something like LOTS of laundry, provisioning and a couple of boat projects that needed immediate attention! Then we had to prepare for this mara'amu and today we couldn't leave the boat! Corie, on the other hand, has gone surfing for the past three days and has already driven around the entire island by car with her surf buddies! But when Corie surfs, everybody is happy and this is really the first time she has been able to surf since Mexico! After the mara'amu passes, there is the island to explore, music to be heard, dancing to be seen, waterfalls to be hiked and lots of wonderful French and Asian food to try! In the meantime it's my anchor watch so I better go check our position!
R of Rutea
-----
At 6/5/2011 5:41 AM (utc) Rutea's position was 17°34.81'S 149°37.14'W
----------
radio email processed by SailMail
for information see: http://www.sailmail.com/
Posted by Neal aboard Rutea at 11:03 PM