I don't know why I was so anxious to leave Hana Moe Noe Bay on Tahuata Island. It had a nice sandy beach (the first one we found in the Marquesas), the holding was very good and the snorkeling exceptional. For some reason, I was ready to leave when we got there so after just two nights, we left at 0-dark-thirty last Saturday. The sail to Ua Poa was squally with lots of rain and very lumpy seas. The skies remained heavy with clouds as we approached Ua Poa and it wasn't until we were almost too close that we got a glimpse of the towering spires that shoot up thousands of feet from the center of the island - very dramatic. The sea on the north end of the island, where the main anchorage is, was about as lumpy and confused as we've seen on this trip. I worried that no matter how well-protected the anchorage is, it was going to be an uncomfortable night. There were eight boats all ready anchored in the too-small, too shallow bay and they all were anchored bow and stern. Our guide book instructed us to anchor south of the quay, which left even less room. (I've got to figure out a better stern anchoring system for Rutea - it's a huge project to deploy and retrieve the 45-pound Danforth anchor and it doesn't happen quickly - if it does happen quickly, the teak cap rail takes an awful punishment as the 3/8" chain gnaws it's way out of the lazerette and over the side. However, with three of us on board, we get the job done in a fairly orderly fashion and we positioned ourselves perfectly.)

No sooner did we get the anchors set when the French Customs force decided to pay us a visit. It was obvious that they had been watching us as I hadn't even had time to mop my sweat-soaked brow when they climbed aboard. These were three big men, one of Polynesian descent and the two others appeared European. They filled out a form and asked us questions like, "Do you have more than $10,000US cash on board?" or, "Do you have narcotics on board?" and we tried to be pleasant and polite with our responses. They did a rudimentary search of the boat and wanted to know how much liquor, wine and beer we had on board. I think they were a little disappointed when they didn't find much. As they were leaving, I asked if I got some sort of document or sticker saying we had been inspected. "No," came the reply from the big Polynesian, "We can search your boat anytime we want."

Our old guide book had told us of a restaurant in town that had local music and dancers on Saturday nights. But after a thorough canvas of the entire village, we found that of the two restaurants (one was a pizza shack) nothing was open. In all fairness, it was the day before Easter but we found things to be unremarkable and boring.

The next morning we reversed our stern anchor drill and took off for Nuku Hiva, the most populated of the Marquesas Islands. The wind was out of the east at 20-25 knots and our course was almost due north. With a reefed main and just the staysail out, we crossed the 26-mile span in slightly less than 4 hours and under glorious blue skies - a perfect way to spend Easter, if you ask me!

We're now in Taiohae Bay, which is wide open to the south and it's a little rolly for my liking. The village is still very small even though it's the largest in the Marquesas. There's about 15 other boats here and many of them we know from Mexico and other ports. Tomorrow we're going to try to get fuel but the prospects don't look great: The fuel 'dock' isn't set up for yachts and using fuel jugs to schlepp 80 gallons of diesel is a challenge. Oh, well, we've got all the time in the world.
-----
At 4/26/2011 3:15 AM (utc) Rutea's position was 08°54.86'S 140°06.06'W 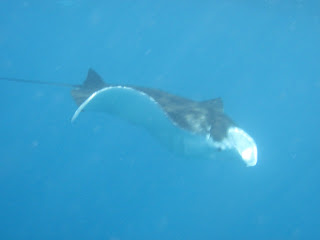