The Final Preparations are Almost Completed! 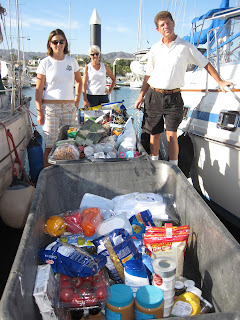 3 Full Dock Carts
As our Jump to the South Pacific is only a few days away, the last details on the 'To Do' list linger annoyingly.  The provisions have been bought (the shopper behind us at Costco couldn't resist and had to peek over my shoulder to see the total on the cash register's display - he let out a long, low whistle) and we drew  stares when we pushed our cart through the aisles at Mega, one of the large grocery store chains in Mexico.  What amazed all of us is that we were able to stow everything on board without resorting to having sacks of rice stacked on the settee.
We have checked and double-checked all of our systems.  I've poured over the rigging, engine, spare parts, plumbing, electrical and communications systems.  When Ian and Sean came down for Spring Break, they had their suitcases stuffed with toilet overhaul kits, flashlights, pelican hooks, books, drugs (it's wonderful to have someone in the family who is a health-care expert) and I still had to airfreight in 400' of Yacht Braid!  We have to leave now - we have no more money.  At least we can't spend it on the high seas. 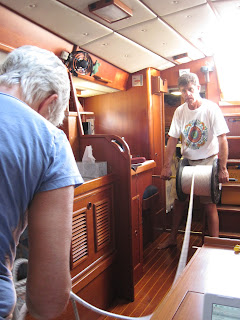 Making New Spinnaker Pole Topping Lifts
Our position as Coordinators of this year's Pacific Puddle Jump Fleet has let us meet many new people and we've made a lot of new friends.  There have been quite a few details that we've dealt with but I think the real work will start when the main portion of the fleet gets underway and I'm net controller on the single sideband radio net.  Tonight we had ten boats check in and it took over forty minutes to get through the entire list.  According to our database, there's forty-eight boats leaving from the west coast of Mexico and the US.  That's going to be some serious radio work!  On the other hand, one of the boats in our fleet has already reached the Marquesas and more should be arriving by early next week.
We'll probably be out of internet range for a while.  We'll still be able to post on our blog (at least we won't have an excuse not to post) but we won't be able to upload photos.  More importantly, we can still get emails from all of you while we're underway.  Did you hear me?  WE CAN STILL GET EMAILS FROM ALL OF YOU WHILE WE'RE UNDERWAY!
The long-range forecast looks great with a strong Pacific high building right where it's supposed to and the sub-tropical jet is reinforcing the trade winds.  The big storms marching across the North Pacific are sending down some pretty good-sized swells but they should be pretty far apart by the time they reach us.  Even though we're going to sail conservatively, we hope to make good time.
We miss all of you and hope to hear from you soon  Mauruuru roa!
Posted by Neal aboard Rutea at 10:00 PM