The sun rises at 7:45 a.m. so it's hard to drag myself out of bed before 8:30!  Then there is the morning radio net to check into and listen to- otherwise you would not know who is coming and going, who has what for sale, who needs something you can provide (or vise-versa) or what is happening around town!  We then check email while sipping coffee or tea (just in case someone has written...) and recently we have been answering a slew of puddle jump email questions, updating rosters, and organizing radio nets and departure dates (one boat has already left!)!  It's then time to head up the dock to the showers which are a solid five minute walk away IF nobody stops you to talk along the way (or if you don't forget your key).  Since somebody always has some important early morning dissertation to share, it's at least an hour before you find yourself scrubbed, talked out and returning to the boat while trying to prioritize boat projects for the day!  By now it's at least 11:00 a.m.!  Life as usual!

Yesterday I left Corie and Neal to scrub the boat while I took the bus into P.V. to search out a music store for cuerdos para mi guitarra.  In my furious practicing I had broken a string and we were having a Puddle Jumpers jam session last night so off I went!  On a good day, it takes about an hour to get into Vallarta by bus from La Cruz.  Well, yesterday the bus driver had to stop for gas on the way into Vallarta which added an extra 15 minutes to the trip.  That did, however, allow a couple of musicians to hop on the bus and play a couple of guitar songs and then walk the aisle with palms out for donations.  At the next stop another guy hopped on the bus and passed out key chains with pink flamingos attached and a note that said he was deaf.  Before the following stop he passed each passenger again and either collected the flamingo or ten pesos.... what would you have done?  The ride was long but at least it was entertaining!  The only entertainment on the return bus trip later that afternoon was that the bus driver got a ticket!  I'm not really sure why, but maybe it was because he couldn't get the bus doors closed.... the passengers standing in the aisle and the little kids sitting up front on the bus dashboard console were holding on for dear life!  Life as usual!

Earlier in the week, in order to distract ourselves from feeling blue over Caity and Danny leaving La Cruz (we had a very fun six days together!) we sailed Rutea to Yelapa.  Yelapa is eighteen miles across Banderas Bay (on the south side) and is accessible only by boat.  Romeo zoomed out to meet us in his panga and convinced us that he had the best moorings in Yelapa and the price also included a panga ride through pounding surf into the beach (we never would have made it in our dinghy!).  Built on the side of a steep cliff, Yelapa hangs on the hillside in a dense palm and hardwood tree forest.  Narrow cobblestone lanes traverse the hillside and while we walked up and down them, we passed others traveling via horseback or ATVs.  After hiking to the waterfall up above the town, we meandered the streets peeking through beautiful bouganvillea covered walls and courtyards out to incredible vistas of Banderas Bay.  Life as usual!

After a very rolly night on the mooring we headed to the "relative" calm of Punta de Mita where we anchored just off two of Corie's favorite surf spots- El Anclote y El Faro.  On the way over we tested our new auto pilot, practiced "heaving to" and flew our spinnaker while ooohing and ahhhing over breaching Humpback whales!  Three days of boat projects and testing all systems (again) while on the hook allowed us to check a few things off of The List and add a few new things to The List!  Corie got in a little surfing and Neal traveled to a seminar on the two perfect-weather days but one of the days was so windy that we couldn't leave the boat.

So finally tonight after a pretty quiet Sunday- well there was a pretty steady stream of people stopping by to examine the polishing job that Corie and I are doing on the stainless (yes, we are polishing the stainless on a 50 foot boat with a toothbrush...)- I find the space to update my blog and try to convey a slice of life as usual.  Or, is it? 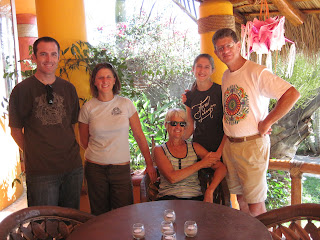 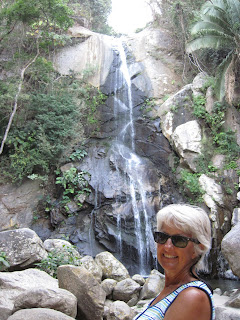 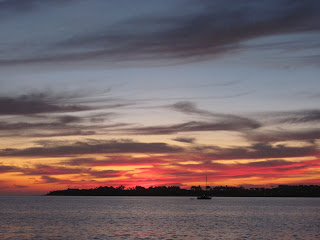 Posted by Neal aboard Rutea at 8:32 PM