The Count Down Continues 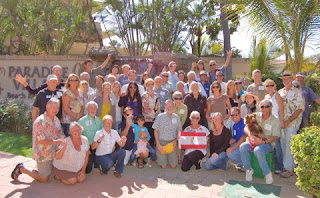 Photo by Andy Turpin of Latitude 38
Used without permission
The sailing magazine, Latitude 38, hosted a Kick-Off Party for those boats jumping off to the South Pacific.  They fed us pupus and beer.  It was OK but more of a seminar than a party.  I think most of the cruisers were looking for an opportunity to cut loose and enjoy lots of their favorite beverages but it was too organized for that.  We left early and went to the grocery store instead.
But our own preparations are coming along nicely.  I had installed the auto pilot on Rutea fifteen years ago and didn't think much about it as I have a spare part for every component.  However, while sailing away from San Jose del Cabo, the compass controller failed.  Not really a big deal as I had a spare and it took only a couple of minutes to replace it.  However, now we no longer have a spare and there are none available anywhere (the manufacturer went out of business long ago).  So, I decided to replace the working auto pilot with a new one and retire the old one as a spare in the event that the new one fails - something that auto pilots are prone to do.  It's one thing to replace it while sitting comfortably at the dock, it would be altogether different if we were 2,000 miles off shore.  Many boats have made the passage without any auto pilot but it doesn't sound like fun.
Corie is getting lots of surfing in while Ruthie and I continue in our roles as coordinators for this year's fleet.  We've finally got the t-shirts figured out (only two weeks left to place your order!) and there's only a half dozen or so seminars left.  It still looks like we'll be jumping off in late March.
OK, enough goofing off!  There's work to be done!
Fair winds.
Posted by Neal aboard Rutea at 4:04 PM