The water is so warm in Phang Nga Bay that sea life grows at an amazing rate.  If I want to keep Rutea in a ready-to-sail-at-a-moments-notice condition, I need to dive down and scrape the barnacles off her prop at least once every three weeks.  So, after one of these excursions to Rutea’s underside, I suggested that we cast off the dock lines and do some exploring of the bay that we’re anchored in.  We had slipped into a routine that was leaving us boat-bound, reluctant to leave the comfort of our air conditioning, save for daily trips to the marina’s fitness center.  Once we had our tanks full of fuel, we headed out with our first stop to be the anchorage on the north side of Ko Boi Yai, one of the many islands in Phang Nga Bay and that didn’t even show up as an anchorage in our cruising guide.  From there we headed over to Ao Po, where our friends, Bruce and Alene, are refitting their 50’ trimaran.  They joined us for a day sail and we joined them for a dinner at a local restaurant that night.

It felt so good to get away from the dock even if we did have to suffer the heat and humidity that is the lack of air conditioning.  It had been so long since we had actually be cruising and I was pleasantly surprised at how well all of Rutea’s systems performed after sitting at idle since March. 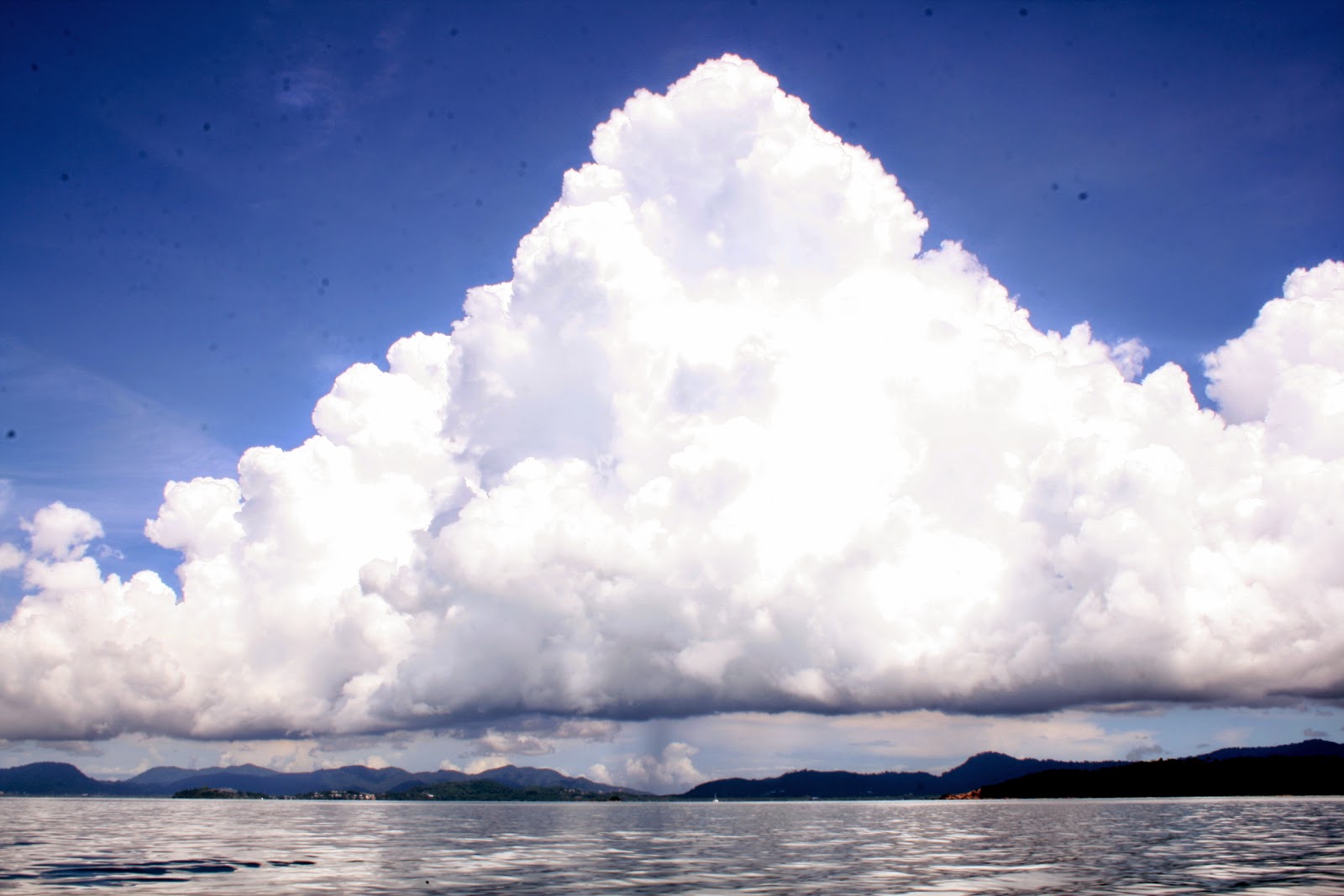 As we had left somewhat suddenly, we didn’t have a chance to provision properly so we decided to just make do with what we had on board although we were tempted to stop in Ao Chalong, a popular anchorage for cruisers with good grocery stores nearby.  But we were enjoying being away from everything too much so we decided to press on.  As we motored south, a cloud formed over Phuket Island and I watched it grow from a puffy, idyllic, lazy-looking cloud into a monster of a thunderstorm.  Its direction was the same as ours so I wasn’t too concerned – until it changed directions and started to come our way.  At first I thought we could outrun it but we later thought it would be best if we made a u-turn and headed back north.  Oops!  The thunderstorm changed its direction again and started to come right for us!  We made another u-turn and this time we had no place to run – the storm hit us squarely.  The wind gusted from a dead calm to 30+ knots in a few seconds.  A torrential rain fell that left visibility reduced to just a few feet.  Lightning filled the sky and thunder exploded in long, rolling tolls. 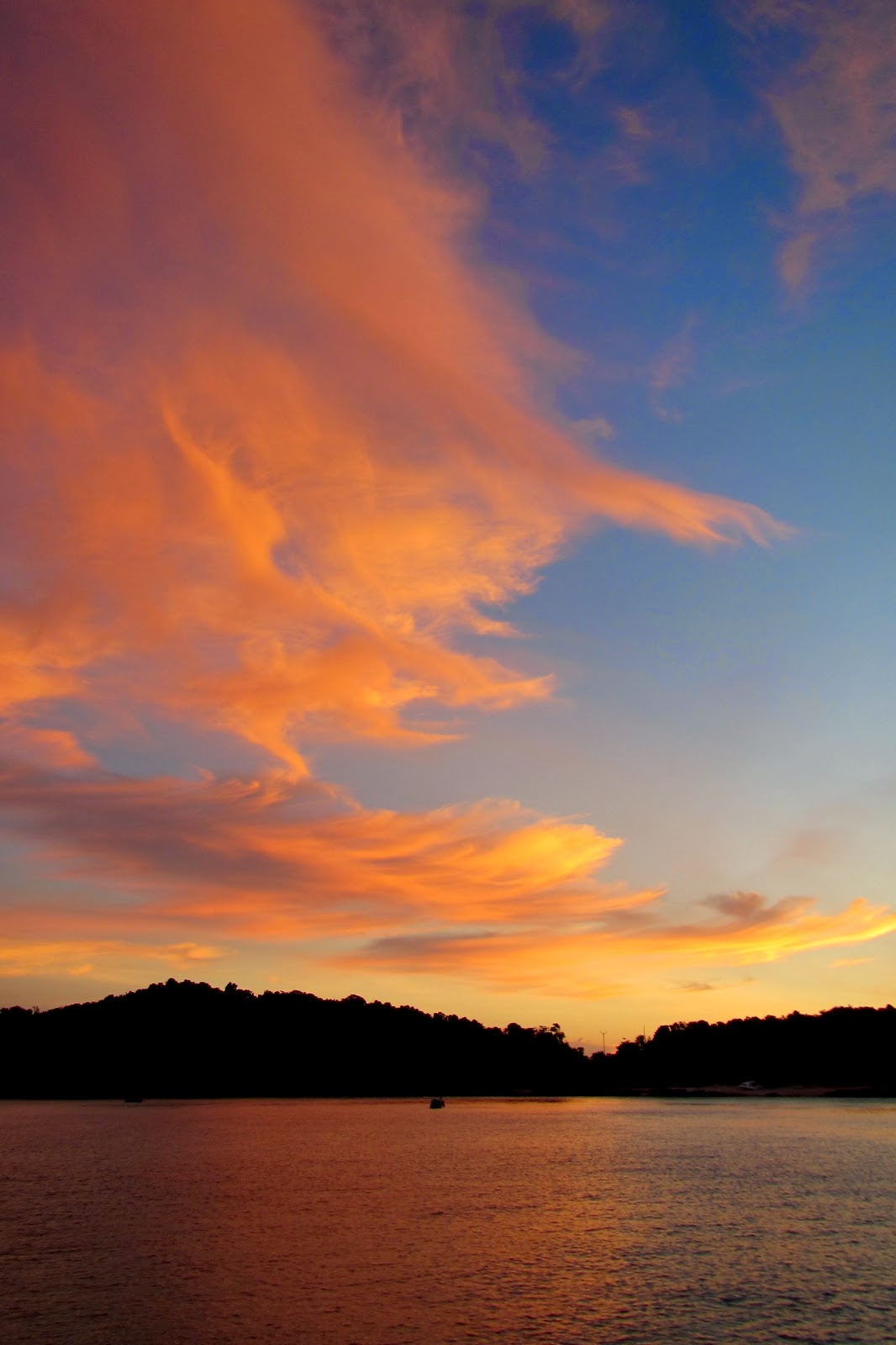 A Brazilian we had met told us that some spectacular snorkeling was to be had at Ko Mai Thon, a small island that’s not even in Phang Nga Bay but rather out in the Andaman Sea.  Much of the coast of the island is roped off as a marine preserve but we found a relatively-protected place to anchor and we were soon loaded in the dinghy, making our way for some promising-looking coral.  The problem is that we have been spoiled with off-the-chart places like the Tuamotus, Tonga, Fiji, Chesterfield Reef and the like – its hard to be enthusiastic about a place where the coral is brown and lifeless and there’s just a few brightly-colored fish.  We did get a great sunset, though.

We left Ko Mai Thon for Ko Phi Phi Li, the smaller of the two Phi Phi islands but a tourist magnet nonetheless.  Usually when we arrive at a place like that, all the moorings are taken and we’re left with few good choices, however, this time our luck was with us and we had got to pick the best mooring in all of the famous Maya Bay.  The bay is stunningly beautiful but the constant traffic of tourist boats coming and going was distracting.  Still, we got a good snorkel in and left our prized mooring as the wind was filling in, making the place uncomfortable.  We sailed around to the backside of Ko Phi Phi Li and soon ran out of adjectives to describe it’s beauty.  As evening was approaching, we found an incredible place to spend the night.  We toured around the area in the dinghy, barbequed an excellent dinner and retired early – only to be awoken at midnight as we had come too close to a sailboat that had picked up another mooring near us.  Protocol in this situation is well-understood internationally – the person who was anchored (or moored) first, has the right to stay.  The second or subsequent boat needs to move although in this case, we were concerned that if the other boat moved to the next available mooring, we still be too close together.  So we both took moorings as far apart as we could.  It took a while to let our sleepyness return and once it did, Ruthie and I headed back to our bunk.  It was only a couple hours later when we were woken again as the wind filled in to about 30 knots and was pushing us dangerously close to the cliff walls.  I stayed awake until daylight as one can never be sure how strong the moorings actually are. 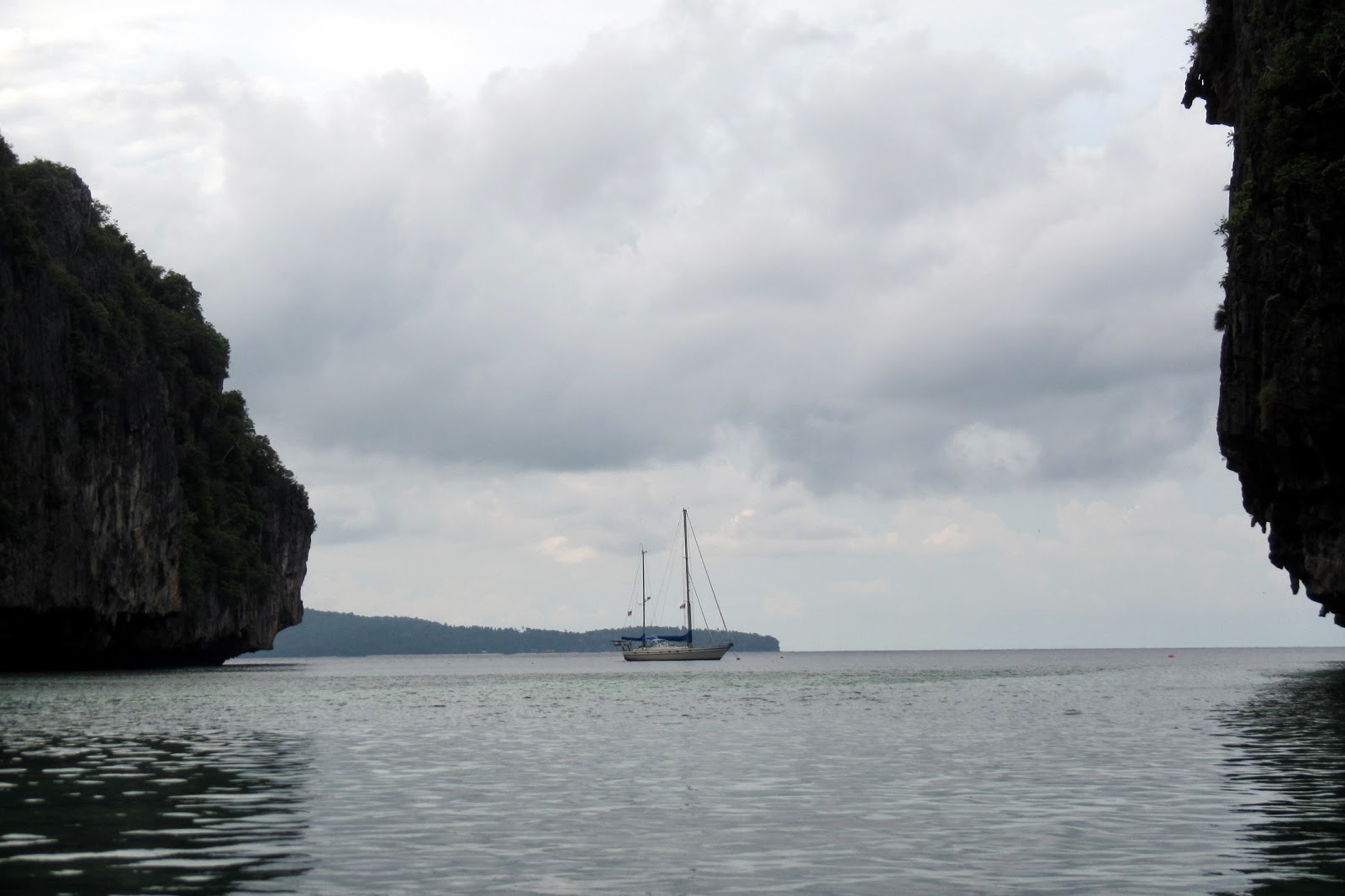 This morning under grey skies we moved three miles north to Ko Phi Phi Don, a tourist destination of epic proportions.  Even though this is the ‘low’ season, the narrow sidewalks were crowded with people and all the shops were open.  We had a meal and a beer and another beer as we waited for the rain to lessen.  When it became obvious that it wasn’t going to, we launched the dinghy and drove back to Rutea in the pouring rain.
Posted by Neal aboard Rutea at 5:53 AM