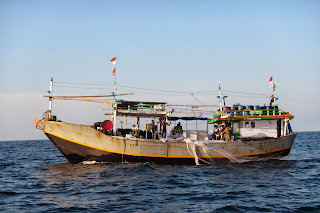 The one consolation of being forced to motor any significant distance on Rutea is that usually the seas are flat and such was the case as we made our way north across the Java Sea.  The freighter traffic was pretty intense, though, and we had to dodge a lot of fishing boats as well.  One boat was paying out a net that was over 2.5 miles long.
We deliberately timed our arrival at the mouth of the Kumai River to the beginning of a flood tide and even though we had to continue to dodge freighters, we were able to sail the entire twenty miles upstream to the town of Kumai.  Friends of ours had made arrangements with a tour operator and booked us a two-night, three-day passage on a boat that will take us to the Tanjung Puting National Park where orangutans live in their natural habitat.  It has been said that this is a safe place to leave the boat for a few days and we’re going to hope for the best. 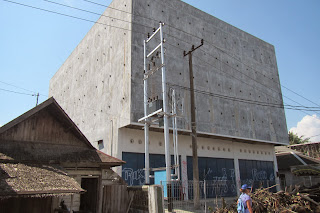 Today we went into the town of Kumai and I think it is easily one of the ugliest towns I have ever seen.  Besides the typical dusty streets and the litter everywhere, this town has hundreds of tall concrete buildings that have no windows – they look like small prisons.  In fact, they’re nesting sites for swiflets who build their nests from their saliva.  Apparently, the Chinese have a fondness for Bird’s Nest Soup and a kilo of this tasteless, hardened bird spit can fetch up to US$3,000.  The buildings have loudspeakers on the roofs and play the swiftlet song, hoping to attract more birds.

Despite the usual trappings of a poor Third World town and the fact that its hot as hell and the power was out, we were able to find a decent plate of Mei Goreng (fried noodles and vegetables) for about US$1.00.  The market had a nice selection of fresh produce and we bought some beautiful fresh fish for slightly over US$2.00 per pound (take that, PLSF!).  We’re very excited about our trip to the deep, dark jungle of Borneo tomorrow and I promise a posting soon after we return.
Posted by Neal aboard Rutea at 1:29 AM