﻿﻿
﻿﻿
We had met Roger and Sherry on the Gulfstar 44 Equanimity when we were sailing up the Queensland coast and liked them immediately.  Not only did we have a lot in common but their bubbly personalities, great senses of humor and easy going styles made them very fun to hang out with.  They, too, took the Eastern route and it was natural for the four of us to make plans to travel in Bali together.  It was serendipitous that we also met Sunny, an expat American living in Lovina Beach, who knew everyone and much about the area.  She made recommendations on where to go and how to get there, even going as far as hooking us up with a car and driver.  A rental car is about US$30 per day but for about US$45 per day, you can get a car and driver which is well advised as the narrow streets are clogged with motorbikes, there are no street signs and any foreigner is automatically at fault if there’s an accident.
Our first foray inland was to some spectacular waterfalls.  The hour-long walk to get there did include about 300 steep steps but we also got to learn much about the local flora and fauna.  Did you know that the coffee plant’s blossoms have a delicious fragrance which smells nothing like coffee?  When we got close to the falls themselves we found that we had to shout to each other to be heard over the roar of the falling water.  The heavy mist in the air swirled around us as the wind generated from water falling so far created it’s own Force 5 breeze.  The water fell into a good-sized pool that was only about 5 feet deep and it felt incredibly refreshing after our sweaty hike.  Once back in the car, we drove to a beautiful old Buddhist temple and wandered around the wonderfully landscaped grounds before heading back to our respective boats.
Several of the other cruisers had already made the trip to Ubud, a popular destination for tourists in central Bali and some of their reports made it sound not quite so attractive.  Regardless, we made plans to go anyway as it sounded like fun to do a road trip and get away from the boat for a few days.  On our way there, we stopped at a temple situated by the side of a large, fresh water lake and at that elevation the air was decidedly cool - it was the first time in months that the concept of anything more than a t-shirt and shorts was even considered.  We checked into our hotel which wasn’t luxurious but was very nice with spacious rooms and a wide patio.  At US$34 per night my expectations hadn’t been very high but I found the place delightful and quiet.  After a fabulous lunch we strolled through the very busy, very touristy town and later that evening saw a terrific Balinese dance performance. 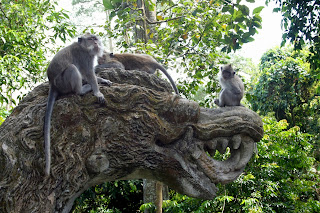 The breakfast that came with our rooms was actually pretty good but we didn’t linger as we wanted to get to the Sacred Monkey Forest Sanctuary before the crowds and before it got too hot.  It was a short walk from our hotel and right at the entrance there were macaque monkeys hanging around.  Large signs had a long list of warnings about the monkeys and although wild, they have no fear of humans.  In fact, they’ll steal just about anything from you including wallets, sunglasses, cameras and jewelry.  We weren’t there two minutes when one monkey grabbed Sherry’s bottle of water but fortunately one of the staff brandished a slingshot and that scared the monkey off.   In the forest is also a Hindu temple and the monkeys make good use of the statues as perches and beds. 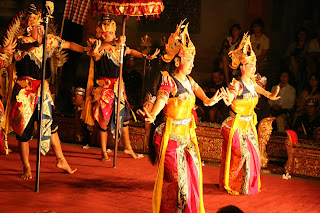 In the afternoon we hired a driver that took us to see more temples and that evening we saw still another Balinese dance performance although this one used no musical instruments, just a large group of men chanting.  It was bizarre but entertaining nonetheless.  Sherry and Roger treated Ruthie and me to dinner to celebrate our 35th wedding anniversary.

Our driver was going to pick us up after lunch to take us back to Lovina but I wanted to do a little shopping before we left as Ubud is renown for it’s batik.  Any one of the thousands of souvenir stores sell cheap batik clothes but I was on a mission to find something of decent quality.  An inquiry had provided us with a prospect and without too much difficulty we found Bamboo.  Completely different than any other store we had been in, the owner, Koni, who spoke perfect English, turns out to be a talented artist as well as a successful businessman.  The four of us were stunned by the gorgeous fabrics and impeccable tailoring of the clothes.  Granted, the shirts were about five times the cost of the cheap shirts in the souvenir stores but easily worth it.  Koni does all of the designs himself and he says that no two shirts are alike.  Even though it takes a tremendous amount of time and effort to make a batik ‘chop’ – the tool that presses the wax into the fabric, he only does a few runs of any one design.  I begged him to sell me a franchise but he said no.  I asked if I could wire him money in the future, would he send me shirts?  Again he said no.  The worst part about being there was having to make a decision about what not to buy.

There was barely room for all of us and our purchases in the car for our trip back.  We made it back just in time for the Farewell Ceremony and quite a few of the boats in the Rally had already left Lovina Beach.  Rutea had done fine by herself and it was a good feeling to be ‘home’ again.
Posted by Neal aboard Rutea at 5:32 PM