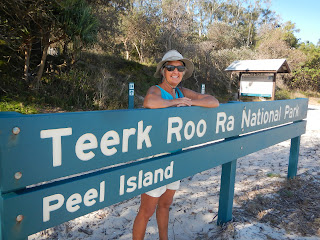 “Dawn comes early on a boat.  Just about sun-up every day.”  (Captain Ron)  And here at 27: 30. south, first light is about 4:00 a.m. and sunrise is at 4:43 a.m.!  That makes for some pretty long days!  You might think that means that we get a lot of extra stuff done…. but not necessarily!  However, when we first arrived I couldn’t believe my eyes when I saw the Ozzies out sailing already at 5:00 a.m.!  It certainly does help, though, when you are trying to time an early outgoing or rising tide. I think as we sail south it will get lighter later.  The Queenslanders don’t believe in daylight savings time.  They say it fades the curtains and confuses the cows.  However, in more sophisticated New South Wales we will begin daylight savings time and spring forward an hour.

After an expensive five days in a Mooloolaba marina (don’t you just love the way that word rolls around your mouth?) we decided that this Newport- Beach-like- scene wasn’t where we wanted to spend the next four months.   Instead of watching Corie leave for work every day by 6:15 a.m. we opted to again cross the (continuously being dredged) bar and sail on down the Sunshine Coast, past the Gold Coast, into New South Wales and perhaps see a little opera in Sydney!  We timed the tides, listened to the VMR weather said good-bye to Maroochydore, Marcoola and Yaroomba and headed towards Moreton Bay- again timing the tide to eek around Skirmish Point (5 feet under the keel- thank you very much…) anchoring in seven feet under the keel at mid tide in Deception Bay, six and a half hours later!  Whew!  It’s intense sailing down this Aussie coast!  So many bars and not the kind you are thinking of, either!

Sailing across Moreton Bay we could see Brisbane which is twelve miles up the Brisbane River!  That is the other thing about this country…. it is flat!  We sailed passed miles and miles of pristine, white, soft sand beaches with no backdrop except an occasional ancient volcano shaped cinder cone or outcropping of jagged rock jutting up at 90 degree angles.  The air is clean, the water is blue and the surf is non-stop.  You might be pleased to know that we are now out of croc, cyclone and box jelly fish territory and only have to remember to worry about dingos, death adders and sharks.

Now anchored behind Peel Island we discovered the favorite anchorage of the local cruising fleets who were fortunately leaving late Sunday afternoon as we pulled in.  Monday morning finds us almost alone as we plan to walk the mile long beach and venture in to the eucalyptus forest.  You can hear the forest (almost from the boat) as it is full of birds and ZZZzzzers!  Something (I don’t know what they are) that make a crazy, loud, zzzing noise….. like a cicada?  We need to plan our route down through the inside passage to Gold Coast Seaway which like Sandy Straits is very shallow and needs to be timed with sunlight (not a problem) and the tides.  Today and tomorrow we have 25 knot winds from the northwest, but tomorrow night it switches around to 25 knots from the southwest.  Go figure!  Hmmm, so an anchorage in the straits that is protected from the north and the south with a  MLW depth of seven feet!  In the meantime, Neal has made scones for breakfast and the sun has been up for five hours (dawn comes early on a boat!) and all I have accomplished is this meandering blog!

Cheers Mate!  No worries!  See you in Sydney!

Posted by Neal aboard Rutea at 4:52 PM