One of the things high on the Must-Do list for the Yasawa Islands is to visit the caves at Sawa-I-Lau so we made our way north from the Blue Lagoon.  The bay was calm but the sky overcast and threatening when we arrived and after a little 'discussion', we had ourselves well-anchored.  As with the other villages we visited, we went ashore right away to present our yaqona (kava) to the chief for the sevusevu ceremony.  The chief of Nabukeru village was very pleasant but seemed to be eager to get the formalities out of the way and wasn't rude in any way.  I think he was somewhat preoccupied with the fact that his fishing boat had a hole in it and he was trying to figure out the best way to patch it.  "Let me see it," I said.  After a quick look, I told him that I'd go back to my boat for supplies and I'd repair it when I returned.  Ruthie stayed on shore and was surrounded by almost a dozen kids who acted as tour guides of the very small village.

I returned, armed with an arsenal of chemicals (epoxy resin, hardener, fiberglass cloth, colloidal filler, acetone, etc) and proceeded to repair the hole.  The sun was hot and I sweated profusely but in not too long a time the sticky goo was starting to harden and I was receiving multiple vinakas (thank yous) from everyone watching.  Later that afternoon as we were down below on the boat, we felt a disturbing jolt and heard a kind of crunch that we knew meant trouble.  I didn't think we had dragged anchor but a squall was passing by and we had swung into a coral pinnacle - even though we had more than 20' of water under the keel, this pinnacle had suddenly appeared and our rudder was banging into it.  We quickly sprang into our well-rehearsed Anchoring Drill but at the same time the skies let loose with a cloudburst of rain.  Fortunately, it was quite warm but it was so much water coming down so hard that even shouting Ruthie and I couldn't hear each other.  Anchored in deeper water, we felt more assured that none of those pesky coral pinnacles were going to creep up on us.


The following day we went to the famous caves at Sawa-I-Lai, landing the dink on a small scrap of beach.  It was raining lightly but it's pretty easy to ignore when the air temperature is 85 and the water temperature is 83.  The caves were less than spectacular although it was kind of a rush to dive down and swim under rock to reach the second pool.  After no more than 30 minutes, we were out of there, on our way back to  Rutea and pointing her bow southward.  We stopped for the night at the village of Somosomo, did the sevusevu ceremony with the woman chief and in the morning were underway again to the rolly anchorage of Navadra - although this time it wasn't nearly as rolly.  (There wasn’t much enthusiasm to visit the village of Soso as it sounded mediocre to us.)  We talked with Corie on the phone who had just finished a 10-day trip to the Lau Group, some of the most remote islands in the Fiji group, on The Shannon, a 36-foot sloop.

It was Mother's day when we reunited with Corie and Kevin, the owner of The Shannon, and in celebration we went out for dinner in Musket Cove.  Kevin left the next day as he had to get back to work in Hawaii while the three of us tackled the peeling varnish on Rutea's cap rail.  The decision that we needed to make was whether to paint Rutea's bottom before we left Fiji for California or waited until we returned.  Our decision to do it now was primarily based on anticipating our eagerness to get back to cruising when we returned rather than sit in a boatyard so we headed to Port Denarau. 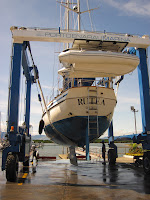 Once we negotiated the narrow channel that leads into Port Denarau, we could have been anywhere in Southern California.  A modern marina, tony restaurants and fashionable stores make the place look more like Newport Beach than Fiji but it was a nice change from the remote places we had just been.  We took things even a step further and checked into a hotel while Rutea was on the hard (the boatyard doesn't allow live-aboards) and our one-bedroom apartment was delightful - well appointed, a nicely equipped kitchen, big flat screen TV, a swimming pool right outside the double sliding glass doors and a washer and dryer!  We brought all our dirty laundry from the boat and kept those two machines working overtime.  Whereas I had planned to do all the work on Rutea myself, the labor rate at the yard is FJ$15.00 (US$8.50) per hour so I let the yard clean, sand and paint the bottom while the three of us persisted in getting the cap rail stripped, sanded and varnished.  Rutea's hull looks great and I could only find two 50-cent-sized blisters to repair - not bad for a 28-year old boat.  Four coats of hard antifouling paint and hopefully we won't have to do anything to the hull again 'til we reach Thailand.  We splashed her this afternoon, did still more sanding on the cap rail and scrubbed her down well - it feels good to be back in the water.

Just one week until we climb aboard a jet for San Diego and Caity and Danny’s wedding!  I had made the airline reservations last November and, at the time, this date seemed very far away.  All of us are very excited.  Our list of things to buy now covers three pages of notebook paper - Ruthie may have to look for a job to pay for all this stuff!

Posted by Neal aboard Rutea at 4:33 AM