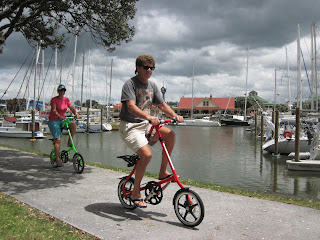 Town Basin Marina - Whangarei
Photo by Yuka Morino
The big news on Rutea is the arrival of our new Strida folding bicycles.  We received three of them from my brother, Paul, and they’re just so much fun!  Not only are they brilliantly functional – they collapse to almost the size of an umbrella and unfold in just a few seconds – but they’re very attractive to look at.  Even a quick spin around a parking lot and you can tell that the components used to build the bike are first-rate.  The ride is incredibly smooth and with very little effort you can find yourself whizzing along at a surprising speed – no worries though because the front and rear disc brakes are impressive with how quickly they can stop the bike and rider. 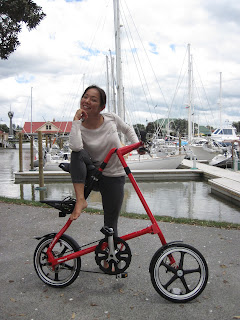 Yuka with Merkava in the background
I’ve been just riding around on the less-traveled streets for now as it’s been a long time since I have ridden a bike in traffic.  On top of that, New Zealanders aren’t particularly tolerant of bike riders (nor are they of pedestrians).  It’s a little odd because the drivers here seem very patient with other drivers but you’d better pay close attention before you step off a curb as it seems like no one will stop for you.  I’ve talked with New Zealanders about this and they admit it and shrug their shoulders.  Regardless, I’m having fun riding around, running errands and generally just goofing off.  One of my favorite things to do is to ride over the Victoria Bridge and visit my friends Mark and Yuka on Merkava.  Mark always offers a cold beer, regardless of what time it is.
Last night, Mark, Yuka, Corie and I went out to McMorrissey’s Pub in downtown Whangarei, just a short walk from the boat.  On Monday nights they have a lamb shank special that comes with a pint of beer.  Mark and I each order a double shank while Corie ordered a chicken burger and Yuka ordered sweet potato fries.  The lamb shanks were served under billowing clouds of steam.  Under the steam were thick, meaty shanks with dark brown gravy smothering them and the large portion of mashed potatoes.  The meat was falling off the bone and almost melted in my mouth.  The flavor was nothing short of exquisite with the faintest taste of grass-fed sheep.  I virtually inhaled my entire meal and even though I was uncomfortably full, for a moment I considered ordering a second round, it was that good.  Instead, I opted for a pint of Guinness Stout and a bowl of Guinness ice cream.  The ice cream in New Zealand is excellent but this was even better.  With lots of chocolate sauce, the ice cream is a unique blend of the sweet cream and the bitter stout.  It works.  It works really well.
The pub itself is supposed to look like an Irish pub and though I’ve never been to Ireland, it does remind me of any number of English pubs where I’ve enjoyed a pint or two.  Dark wood paneling and dark wood tables and chairs are surrounded by Guinness mirrors and Kilkenny signs.  There’s a chalk board where the menu is scribbled out.  The bar has a long line of beer taps with each brew having an elaborate and unique handle.  There are no cushy booths or even a padded chair.  All ordering has to be done at the bar although the bar maid will bring the food you’ve ordered to your table.  But the place has a friendly atmosphere and even though the prices are high compared to the US, tipping isn’t routine.  Perhaps I never gave the pubs in my neighborhood in San Diego a chance (hell, I never paid any of them a visit let alone give them a chance) but I feel very comfortable at McMorrissey’s.  We have all found the Kiwis to be very friendly – almost disarmingly so.  If you come to visit here and you don’t find me on board the boat, take a stroll over to McMorrissey’s.  You just might find me there.
Posted by Neal aboard Rutea at 3:50 AM